Too Close To Breathe by Olivia Kiernan #BookReview #PublicationDay 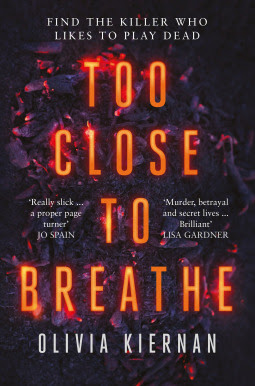 Perfect for fans of Tana French, Jane Casey and Gillian FlynnTOO SOON TO SEEPolished. Professional. Perfect. Dead. Respected scientist Dr Eleanor Costello is found hanging in her immaculate home: the scene the very picture of a suicide.TOO LATE TO HIDEDCS Frankie Sheehan is handed the case, and almost immediately spots foul play. Sheehan, a trained profiler, is seeking a murderer with a talent for death.TOO CLOSE TO BREATHEAs Frankie strives to paint a picture of the killer, and their victim, she starts to sense they are part of a larger, darker canvas, on which the lines between the two blur.Olivia Kiernan's debut is a bold, brilliant thriller that will keep you guessing and leave you breathless.

Olivia Kiernan is the author of TOO CLOSE TO BREATHE, a crime thriller where DCS Frankie Sheehan investigates the murder of Dr Eleanor Costello. At first glance the murder appears uncomplicated but soon spills out onto a dark canvas of fear, lies and murder.Olivia Kiernan grew up in the Irish countryside, a background which left her with a great appreciation of storytelling. Being almost sensible she shelved aspirations of becoming a writer and embarked on a career in science, spending six years in university studying anatomy and physiology before receiving a BSc in Chiropractic in 2003. She worked in this vein for over a decade, always writing in the evenings after work and completing an MA in Creative Writing through part-time study in 2012.In 2015, she began writing TOO CLOSE TO BREATHE as part of National Novel Writing Month, polishing off half the first draft by the end of the month-long writing marathon. After hiding the manuscript on her hard drive for close to a year, revisiting it from time to time to add a scene or remove one, she sent it out to agents. Within a month she had signed with a literary agent and in 2017 a dream was realised when TOO CLOSE TO BREATHE sold.TOO CLOSE TO BREATHE will be released on 5th April 2018 in the UK, and the 3rd of April in the US.

Does the crime thriller genre need another author amongst its' ranks?! Yes it does, if they're all written as well as this one! A very welcome addition to a highly competitive genre!This story is full of mystery from start to finish. When Eleanor is found dead it has all the hallmarks of a suicide, but there's something about this death that is a little off - there's no note and her husband is missing.Det Frankie Sheehan is then called in to help assist with the case. She is recovering from a very violent knife attack that has left her with PTSD, so is a little on edge and those around her are concerned she isn't up to life investigating troubling cases.The more they investigate Eleanor and her past, and dealings with the dark web, the more the plot thickens and a myriad of characters are introduced when another body is soon found nearby and a link is established. Frankie is driven to try and solve this case after failing to save the victim in her last case and this adds an extra edge to her quest in putting all the clues together to get to the bottom of these mysterious deaths, and extremely dark videos being posted online, and unsettling silent phone calls.There are a number of suspects that constantly changed with each new piece of evidence, and I loved how the story took you in one direction, only to swerve off on another tangent!I found this to be a really lively thriller, full of intrigue and fragile characters. Really looking forward to seeing what this author releases in the future!