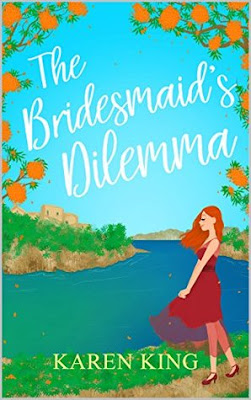 Delighted to be hosting the stop today for this Blog Tour on behalf of Accent Press and Karen King!  As well as a little Guest Post by Karen herself on the inspiration for writing this book, there is also an excerpt for you to enjoy!!!

From the bestselling author of The Cornish Hotel By The Sea Every summer has a story... Fun-loving travel rep Jess doesn’t want to be chief bridesmaid at her snooty cousin’s wedding, but it will cause a family feud if she refuses. She doesn’t want to fall in love either but when a raucous stag party arrives at her Majorcan hotel, Jess hits it off instantly with best man, Eddie. A summer romance is exactly what commitment-phobe Jess needs and, as the stag-do draws to a close, so does the holiday fling. She has no intentions of carrying on the summer fun but when Eddie turns up again, Jess is faced with a big dilemma. Will this bridesmaid get the happy-ever-after she never knew she wanted...

Here are Karen's thoughts on where she got the inspiration from for writing this fabulous new release!

The inspiration for The Bridesmaid’s Dilemma came from a few sources.
I’ve often admired the stamina and friendliness of the holiday reps at the resorts I’ve been to, they seem to be on duty all day and evening and have to deal with a variety of problems and awkward guests. There was a stag party on board one of our holiday flights, they were very raucous but good-natured, and these two things formed the seeds of a story about a holiday rep having a fling with a member of a stag party staying at the hotel where she worked. Then my husband, Dave, booked a trip to Majorca for our third wedding anniversary and that was the inspiration for the setting.
I enjoyed writing this dance scene because it showed how fun-loving, outgoing and popular Jess is, and is the instigation for the growing attraction between Jess and Eddie. I got the inspiration for the scene from a nightclub Dave and I went to in Crete a few years ago. We’d got engaged that day on Santorini, and the reps at our hotel invited a group of us to the nightclub that evening. We had a fantastic time, there were bubbles and foam everywhere and a couple of the women were dancing like Jess and Libby, with a crowd around them clapping and cheering.  I love the atmosphere at clubs, where everyone looks like they’re having such a good time, and I enjoy watching people dance. I’m a people watcher – and I’ll get up and dance myself if I’ve had a couple of Bacardis!

☀☀☀☀☀
And now here's a little extract from The Bridesmaid's Dilemma for you all to enjoy!!

One of the fantastic things about being a holiday rep was the social life. That, and the sun, and all the countries she got to visit. Last season she’d been stationed in Tenerife and the season before that it had been Barcelona. It was hard work, long hours, and sometimes the rooms were pretty basic – a few times she’d had to share with another rep –but she loved the job.
Libby was dancing with Damián, Marta, and a group of holidaymakers. She waved to them and Kurt grinned.
‘Go on, I can see you’re itching to dance. I’ll go to the bar and get the drinks.’
‘Thanks. You’re a star,’ Jess told him, giving him a peck on the cheek then heading off to join Libby and the others. She only had a couple of hours to dance, and she intended to make the most of it.

Eddie recognised her as soon as he walked in. The bright red hair was a dead giveaway, although now it was hanging loose around her shoulders instead of tied up in a ponytail, and she was wearing a strappy silver mini-dress rather than the yellow T-shirt and faded denim shorts she’d worn this afternoon. Very sexy. There was a carefree air about her, a suggestion that she didn’t conform, wasn’t scared to be different. It intrigued him. Jess, that’s what the hotel manager had called her.
He watched as she kissed a fair-haired guy on the cheek then went over to join a group of people dancing while the guy went up to the bar. Were they an item, he wondered. Someone as gorgeous as Jess was bound to be taken.
‘I’ll get the first round in,’ Ross said. ‘What you all having?’
‘Jack Daniels for me,’ said Greg.
Eddie tore his eyes away from Jess and followed Ross to the bar. When they returned with their drinks, a crowd had gathered around Jess and a woman with long dark hair, and people were cheering and clapping as they both danced in the middle of the floor. Jess tossed her long hair, shook her lithe hips and rocked it like there was no tomorrow. While the other woman was gyrating, twirling, twerking, you name it, her black satin halter-neck jumpsuit clinging to her body like a second skin, emphasising her long legs, slender frame and sun-tanned skin. She was pretty, in a conventional sort of way, but Jess was striking. And had curves to die for.
Greg followed his gaze. ‘Hey, isn’t that the lass who helped us sort out our rooms at the hotel?  Who’s that stunner with her?’
‘Probably another rep. Good dancers, aren’t they?’
‘Cool it, mate, getting off with a couple of chicks is not what this stag weekend is all about,’ Ross told him.
‘You might be chained, but the rest of us aren’t,’ Greg said, walking over to join the group around the two dancers.
‘It’d only be polite to say hello, she did help us out,’ Matt said, following Greg.
Ross shrugged his shoulders. ‘I guess so.’
Greg and Matt joined the circle around the two girls, clapping and stamping their feet along with the rest. Tony and Sam followed them. Ross and Eddie looked at each other, shrugged then walked over, too. When the song had finished, the crowd gave the girls resounding applause.
Eddie saw Jess glance over at him, smile and wave. Then she and her friend both walked over to the bar to get a drink.
‘Let’s go and talk to them,’ Greg said. ‘I’d like to meet the friend.’
Eddie followed him, feeling ridiculously pleased that it wasn’t Jess Greg was interested in.

‘Don’t look now, but there’s a group of guys coming over to us. And they’re pretty fit.’
Jess turned her head slightly and saw that it was Eddie and one of the others from the stag group. She’d hoped he’d come over. All the while she was dancing she felt his eyes on her. He really was something. She wouldn’t mind spending a bit of time with him.
Take it easy, he’s probably got a girlfriend, she reminded herself. In her experience, guys in stag parties were always trying it on, conveniently forgetting their girlfriend/partner back at home.
Still, as a rep at the hotel he was staying at, she had to be friendly.
‘That was some dance.’ The other man – Greg according to his T-shirt – said, his eyes on Libby. Sandy-haired, a roguish twinkle in his blue eyes, just the right amount of stubble on his chiselled-chin, the sort of smooth operator with a ‘bad lad’ air that Libby always went for but had never appealed to Jess. Good job he wasn’t the groom.
Libby, true to form, flashed him a megawatt smile. ‘Thanks.’
‘Hello again,’ He nodded at Jess, but it was obvious his attention was on Libby. ‘Thanks for helping us sort the rooms out.’ Greg was slurring his words slightly. They’d probably been drinking all afternoon and evening, taking advantage of the cheap drinks here.
‘You’re welcome,’ Jess replied. ‘Which hotel did you get sent to?’
‘The one over the road.’
‘Oh, this is the stag party you told me about,’ Libby said. ‘Now which one of you is the stag?’
‘Ross,’ Greg pointed his thumb at Ross. ‘Are you a rep at the hotel, too?’ He pointed to the name on the front of his T-shirt. ‘I’m Greg.’
‘So, I see.’ Libby shook the hand he offered. ‘I’m Libby. And yes, I’m a rep, too. Glad you managed to get your rooms sorted out. Manuel is a stickler for obeying the rules.’
‘Thanks to Jess,’ Eddie joined in. ‘We haven’t been properly introduced, have we? Hello, Jess.’ He leaned forward and kissed her on both cheeks, soft sensual lips fleetingly touching her skin, a heady waft of after-shave, warm breath enticingly close. She felt a bit dizzy.  She must have drunk more than she realised.
‘I am Édouard, Eddie.’
Édouard. She mentally rolled the name around on her tongue. Nice. It seemed a shame to shorten it.
‘Er… hi.’
‘Thank you for your help, Jess.’ Every time he spoke it sent goose bumps down her spine.
‘It was nothing,’ she replied.
Greg was looking at Libby as if he’d never seen anyone as amazing as her before. Libby often had that effect on men.
‘Let me buy you and your friend a drink to say thank you. It would have been a really difficult situation without your help.’
‘Thanks, vodka and coke please,’ Libby replied before Jess could decline. Not that she was about to, not with Eddie looking at her like that.
‘And you?’ Greg looked questioningly at Jess.
She smiled and nodded. ‘A vodka and coke for me too, please.’