#BookReview The Cactus by Sarah Haywood 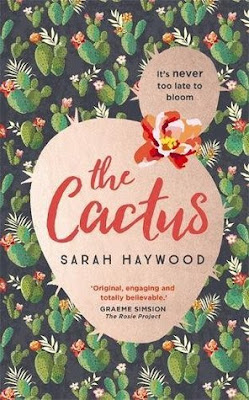 IT'S NEVER TOO LATE TO BLOOMPeople aren't sure what to make of Susan Green - a prickly independent woman, who has everything just the way she wants it and who certainly has no need for messy emotional relationships.Family and colleagues find her stand-offish and hard to understand, but Susan makes perfect sense to herself, and that's all she needs. At forty-five, she thinks her life is perfect, as long as she avoids her feckless brother, Edward - a safe distance away in Birmingham. She has a London flat which is ideal for one; a job that suits her passion for logic; and a personal arrangement providing cultural and other, more intimate, benefits. Yet suddenly faced with the loss of her mother and, implausibly, with the possibility of becoming a mother herself, Susan's greatest fear is being realised: she is losing control.When she discovers that her mother's will inexplicably favours her brother, Susan sets out to prove that Edward and his equally feckless friend Rob somehow coerced this dubious outcome. But when problems closer to home become increasingly hard to ignore, she finds help in the most unlikely of places.This sparkling debut is a breath of fresh air with real heart and a powerful emotional punch. In Susan we find a character as exasperating and delightful as The Rosie Project's Don Tillman. An uncompromising feminist and a fierce fighter, it's a joy to watch her bloom.

5 stars for the cover - it's stunningly beautiful! But unfortunately only 3 stars for the story! That's not to say I didn't enjoy it as it was an interesting story, but I just didn't connect with the character as I hoped I would and I just felt that the book was missing something although I'm not sure what that was!The main character, Susan Green, is very set in her ways! She's very independent and likes her own routine and seems at odd with the modern world around her at times. She is a fan of the old fashioned approaches to life! She's not on social media to the surprise of her work mates, and is happy enough just getting on with her job and taking care of her Cactus collection.The story then follows her as she deals with the death of her mother, the fractured relationship with her brother thereafter and trying to come to terms with decisions made by others in her past that finally reveal themselves to her - all while she is coming to terms herself with her finding out she is pregnant and determined to raise the child by herself.You definitely see a softer side of Susan as the months tick by - she finds a friend in the unlikeliest of places and the quest to try and contest the will that her mother left also leads to some startling revelations that unsettle her and shatter everything she thought she knew. She has to learn the art of compromise and to think of others and their feelings - something that has never been easy for her to deal with.I enjoyed the times when Sarah was looking back at her childhood and how those events changed her, and overall I found it a pretty enjoyable read.