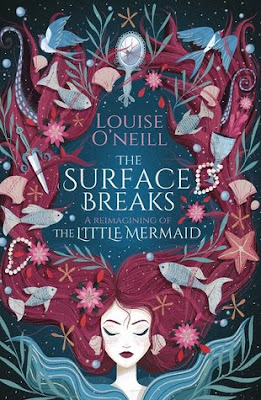 Deep beneath the sea, off the cold Irish coast, Gaia is a young mermaid who dreams of freedom from her controlling father. On her first swim to the surface, she is drawn towards a human boy. She longs to join his carefree world, but how much will she have to sacrifice? What will it take for the little mermaid to find her voice? Hans Christian Andersen's original fairy tale is reimagined through a searing feminist lens, with the stunning, scalpel-sharp writing and world building that has won Louise her legions of devoted fans. A book with the darkest of undercurrents, full of rage and rallying cries: storytelling at its most spellbinding

Five stars for the cover alone!! I just wish the story inside was as powerful as it could and should have been! I was really looking forward to a re-imagining of The Little Mermaid and was hoping to have gone on a journey following Gaia in her quest for love, empowerment and dealing with a world that was extremely sexist, both in the water and on dry land.BUT, what I think ended up happening with this story was that the author tried too hard to deal with all the sexist behaviour and injustices in the world within a few characters which lead to many of them being very hard to like, and that included Gaia and her prejudices too! It became far too preachy, far too contrived and I found myself wishing that the author had chosen another way to portray the story in certain places, other than 'men are all pigs' whether they live in the sea or are human!I did enjoy the side of the story that underlined what women have lost in the way that they see themselves, and the lengths they go to betray who they really are, just to fit in and get the guy that they think they love! This is the kind of message I hope readers - especially young girls - get when they pick this up as it's a powerful message to them to take back their own destiny and not to conform to what society expects. I will pass this book on to my niece and hopefully she will gain a valuable insight into the world and how it portrays women and how men see them through this story.