Scoop of the Year by Tom Claver #BlogTour #BookReview 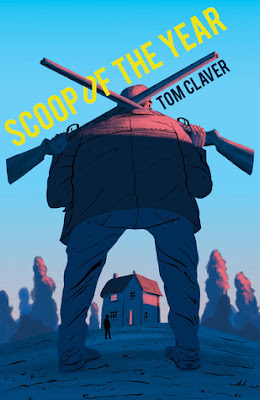 Delighted to be taking part in this Blog Tour, so my thanks to the author and Bookollective for letting me be part of the fabulous tour!!  Here's more about the book that I found a real blast to read!!

Martin, a hapless journalist on a weekly financial magazine, sees his life take a nosedive with the arrival of Tom de Lacy, a well-heeled reporter who grabs the limelight, not to mention the well-paid industrial correspondent’s job that he has his eye on.He does his level best to sabotage Tom’s career, only to see his rival land a plum job in television. But watching his rival’s success while his life disintegrates makes Martin a desperate fellow. Falling on hard times can be murder, and in certain circumstances could even give rise to it.So when Martin gets a scoop on a major corporate scandal, he just has to grab the opportunity with both hands. He sees it as not only his turn to shine, but his duty.

Tom Claver is a freelance journalist who has worked in print and television, and was formerly a director of a publishing company. He was brought up in London and now lives in Dorset with his wife.

After reading a number of 'heavy' books recently it made it an absolute pleasure to jump into this book knowing it was going to be much lighter and I found it so much fun to read!! It has that quirky, dark sense of humour that really appeals and the absurdity of some of the situations that Martin found himself in were just a wonderful touch, and kept the story feeling fresh and exciting!
We all know someone that whatever they touch it turns to gold. And for Martin, that person is Tom! Both journalists but their careers seem to be progressing at slightly different rates! No matter what situation Tom finds himself in, he just comes out smelling of roses. This kind of thing doesn't happen to Martin! Even when he tries to sabotage one of Toms' stories, it backfires on him and he's kind of resigned himself to living a life of feeling deflated and defeated! And his life gets even more miserable when his wife leaves him taking the children with her and he finds himself homeless and jobless! When he hits rock bottom, things do start to pick up but not in the way he could ever have imagined! A lot revolves around his family, with his father passing and Martin and his sisters find themselves battling his Uncle Walt - it's normal to hire a hitman to remove a family member from a property, right?!I loved the quirky and mad humour throughout this book! As he finds himself battling darker forces as he uncovers a huge story of corporate scandal, the craziness is ramped up to an 11 on the scale and you can't help but find yourself cheering Martin on in his endeavours to succeed at something!! Loved all the twists and turns each chapter brings and it made for an extremely enjoyable reading experience!