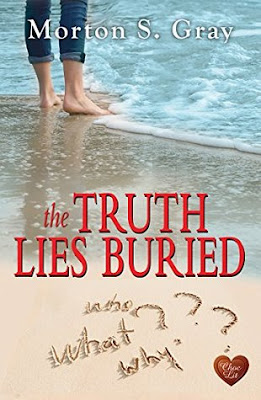 Another gripping read from Choc Lit's Search for a Star winner and a return to the beautifully described fictional seaside town of Borteen Bay. Two children in a police waiting room, two distressed mothers, a memory only half remembered …
When Jenny Simpson returns to the seaside town of Borteen, her childhood home, it’s for a less than happy reason. But it’s also a chance for her to start again.
A new job leads to her working for Carver Rodgers, a man who lives alone in a house that looks like it comes from the pages of a fairy tale – until you see the disaster zone inside … As Jenny gets to know Carver she begins to unravel the sadness that has led to his chaotic existence. Gradually they realise they have something in common that is impossible to ignore – and it all links back to a meeting at a police station many years before. Could the truth lie just beneath their feet?

This was a fantastic read that I raced through as I just loved seeing how things played out for the main character, Jenny, and all those around her as they struggled to piece together the mysteries that had plagued their lives for so long.Jenny returns to Borteen, her childhood home, in very sad circumstances. She's lost her mother and her life has been put on hold while she nursed her through ill health. Her father went missing 25 years ago so she is feeling very alone, but old schoolfriends appear in her life when she needs their support and she soon finds herself feeling very much part of the community and wanting to use that strength to move on with her life. Someone suggests she takes up cleaning to help her decide what she wants to do with her life, and she soon gets her first client and she's thrown in the deep end with what she faces!Carver is grieving for his wife Bliss and has given up, seemingly, on himself and living a normal existence. His brother in law hires a cleaner to help start the massive clean up in his home and when Jenny turns up he's a little reluctant to let anyone in. It soon becomes clear though that they have a past together and this bond brings them closer together and eager to get to the bottom of the mystery that has left them missing a part of themselves for so long. This leads to some dark and rather startling revelations that both weren't expectingThe characters in this book were the main reason I loved this book so much! Jenny is so easy to like and you feel for her as she goes out of her way to help Carver, whilst still grieving for her own loss. And Carver (swoon!!) is dealing with life by burying his head in the sand but finds peace living in the woods and just needs someone like Jenny to let him see that it is possible to move on but still remember those he has lost.The finale was really tense and a fabulous way to end the story and I just wanted to read more! Highly recommended!!