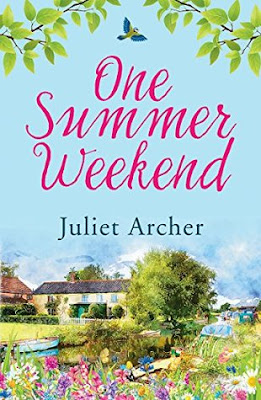 For fans of Kathryn Freeman, Jenny Colgan and Sue Moorcroft. A heart-warming fun read, perfect for the holidays from this award-winning author!
One summer weekend can change everything … Alicia Marlowe’s life as an executive coach is well under control – until she meets her new client, Jack Smith. Jack’s reputation precedes him and Alicia knows immediately that he spells trouble. Not least because he reminds her of someone else – a man who broke her heart and made her resolve never to lower her guard again. Taking Jack on as a client is a risk, but one that Alicia decides to take for the good of her career. As long as she keeps him in his place, she might just make it through unscathed. But Jack has other ideas – including a ‘business’ trip to the Lake District. One summer weekend with him is all it takes to put Alicia’s carefully organised world in a spin …

I found myself totally swept along with the characters in this fabulous story! I do love a slightly damaged cast, and this book has 2 such creatures!  Alicia Marlowe is an executive coach so should be one of those people whose lives are perfect and ordered in every sense.  In her work life that is true, but her personal life is very different and is a much happier soul when she's working than at weekends when she's left to her own devices.

And then there's Jack! Very well known in the tabloid press for his love of the ladies, he finds himself working for a company who has just expanded which means more work heading his way and his boss thinks his business approach could do with some coaching to make him work smarter... and that's how Alicia meets Jack!

I loved these characters! Both are very wary of one another when they first meet, for very different reasons and when Jack suggests they spend time together over a weekend to impress some old friends of him she is very reluctant. But seeing it as work she goes along, and that is when you wonder who is coaching who!

Jack and his past is never too far away and it is fascinating to see how Alicia deals with that when it is clear her feelings towards Jack are beginning to change.  The more time she spends with him, then the more she sees her initial opinion is way off from how he really is!

I raced through this charming story and highly recommend it!!