#BookReview The Winds of Heaven by Monica Dickens 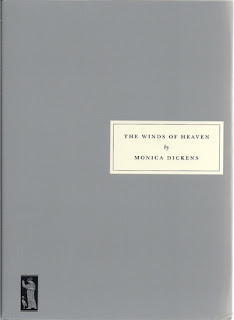 The Winds of Heaven is a 1955 novel about 'a widow, rising sixty, with no particular gifts or skills, shunted from one to the other of her more or less unwilling daughters on perpetual uneasy visits, with no prospect of her life getting anything but worse’ (Afterword). One daughter is the socially ambitious Miriam living in commuter belt with her barrister husband and children; one is Eva, an aspiring actress in love with a married man; and the third is Anne, married to a rough but kindly Bedfordshire smallholder who is the only one who treats Louise with more than merely dutiful sympathy. The one relation with whom she has any empathy is her grandchild.

Another exquisite read from the Persephone stable that is full of drama, some ghastly characters and wonderful observations on the quirks and idiosyncrasies of families.You cannot help but empathise with the main character Louise. Left penniless and homeless when her over-controlling husband passes away, she is left to rely on the 'charity' of her 3 daughters who each have her stay with them in turn for short bursts, before she spends each winter in a guest house on the Isle of Wight. But far from being a caring family, the daughters all see time with their mother as a burden and she's often left feeling in the way. You do wonder how such a woman brought up 3 quite ungrateful daughters, who all seem to take after their father in the way they look down on their mother.There are bright lights in her life though - her granddaughter Ellen has the same outlook on life as Louise, and they are very similar and always thrive in each others' company. And then Louise meets a kind stranger, who shows genuine interest in her and it's lovely to see this friendship blossom as she is treated like a human being for the first time in a very long time.Louise is such a calming character, despite those around her treating her so harshly, and you often wish she'd just tell her daughters exactly what she thinks of them! She often blames herself too for their behaviour. The sisters are all so wrapped up in their own existence that they fail to see life from the point of view of their mother and I think that resonates even now with some aspects of society.Desperate to read more now from Monica Dickens.