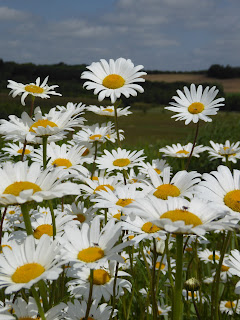 Hello!! I hope you are well!! I'm having a 'meh' day! Didn't sleep well last night and it has taken its' toll this morning! So I hope a bit of blogging and organising my reading list will help perk me up a little - and hopefully this blog post will make sense! Any spelling mistakes you spot, please feel free to mark them with red pen!!

It has been a good week on the reading front though so that is always worth celebrating!!  Still hasn't made the TBR pile look any smaller though!!

And what also doesn't help the TBR pile look smaller is the arrival of new books!  There has been a few! Some from publishers ahead of blog tours, some from shops that I was browsing in and some from websites of publishers who beg  you to buy #JustOneBook to help save them  - Salt Publishing it's all your fault! 😂

So here's a quick round up of the books I've finished, the new books I've 'adopted', and those that I'm currently reading/listening to!   Click on the title for a link to the GoodReads page for more info on each book if you so wish!

Loved this!! Lots of fun, fab characters and a new book boyfriend for me to drool over!!

Another excellent read following a young boy leaving home to help earn money to bring up his family after the death of his father.

The Winds of Heaven by Monica Dickens   - 5 stars

Another stunning story from the Persephone stable!

Listened to the audio version - just over 3 hours long - and was gripped! Has quite a dark feeling behind it - my kind of book!

The Optimist by Sophie Kipner  -  4 stars

On the blog tour for this later next month, and this was a perfect light read full  of proper laugh out loud moments!

Death and the Seaside by Alison Moore
This is the June pick for the Ninja Book Box Book Club which is a monthly book club online featuring Indie books! 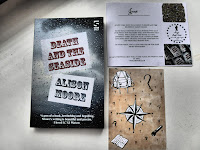 With an abandoned degree behind her and a thirtieth birthday approaching, amateur writer Bonnie Falls moves out of her parents’ home into a nearby flat. Her landlady, Sylvia Slythe, takes an interest in Bonnie, encouraging her to finish one of her stories, in which a young woman moves to the seaside, where she comes under strange influences. As summer approaches, Sylvia suggests to Bonnie that, as neither of them has anyone else to go on holiday with, they should go away together – to the seaside, perhaps.The new novel from the author of the Man Booker-shortlisted The Lighthouse is a tense and moreish confection of semiotics, suggestibility and creative writing with real psychological depth and, in Bonnie Falls and Sylvia Slythe, two unforgettable characters.

THE CHAMELEON by SAMUEL FISHER

Following the plea by Salt Publishing via social media with their #JustOneBook campaign to help them out of a tough spell sales wise, this was my choice when I shopped with them! 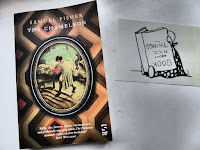 John is infinite.He can become any book, any combination of words — every thought, act and expression that has ever been, or ever will be, written. Now 800 years old, John wants to tell his story.Looking back over his life, from its beginnings with a medieval anchoress to his current lodgings beside the deathbed of a cold war spy, John pieces together his tale: the love that held him together and, in particular, the reasons for a murder that took place in Moscow fifty years earlier, and that set in train a shattering series of events.Samuel Fisher’s debut, The Chameleon is a love story about books like no other, weaving texts and lives in a family tale that leads the reader into an extraordinary historical journey, a journey of words as much as of places, and a gripping romance.

HMV sell books now??!! I was in one of their stores this week browsing the CD's and discovered bookshelves!! Dangerous!!  My old copies of these are way past their best so I just couldn't resist these versions - 2 for £5 wasn't to be resisted either!! 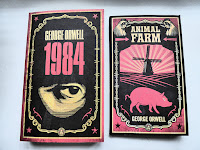 In 1984, London is a grim city where Big Brother is always watching you and the Thought Police can practically read your mind.  Winston Smith joins a secret revolutionary organization called The Brotherhood, dedicated to the destruction of the Party. Together with his beloved Julia, he hazards his life in a deadly match against the powers that be.Animal Farm is Orwell's classic satire of the Russian Revolution -- an account of the bold struggle, initiated by the animals, that transforms Mr. Jones's Manor Farm into Animal Farm--a wholly democratic society built on the credo that All Animals Are Created Equal. But are they?

THE LIGHT BETWEEN US by KATIE KHAN

Received this ahead of a Blog Tour and can't wait to read it! Gorgeous cover too! 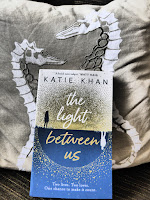 Isaac and Thea were once close, but they've grown apart.Thea works tirelessly, convinced she can prove everyone around her wrong - convinced she can prove that time travel is possible. But when one of her attempts goes wrong, she finds herself picking up the phone and calling her old friend.Isaac is in New York - it's the middle of the night, but when he sees who's calling him, he cannot ignore his phone. At Thea's request, he travels home, determined to help her in her hour of need.But neither of them are prepared for what they will discover when he gets there.

LETTERS TO MY DAUGHTERS by EMMA HANNIGAN

Received from the publishers - with some rather yummy biscuits! - I've been eagerly awaiting reading this since the sad news of the passing of the author Emma Hannigan. Think I'm going to need tissues for this read! 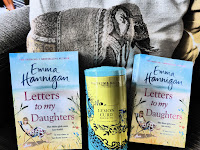 The new bestseller guaranteed to break your heart - and bring you joy... Her three girls were her world. It was time to let them know. To sisters Bea, Jeannie and Rose, the death of their beloved childhood nanny is a devastating loss. As the girls grew up, Nanny May had become so much more to them all: confidant, advocate, comforter, friend. In whom will they confide their hopes, fears and failures now she has gone? Especially now each sister needs a mother's wisdom more than ever...Martha cannot understand why her daughters are so upset about losing their childhood nanny. Yes, Martha was always in demand as a busy midwife, but that doesn't mean she loved her own children any less. But why don't the girls realise that? And has she left it too late to let them know...?

The Gloaming by Kirsty Logan

DEATH AND THE SEASIDE by ALISON MOORE

With an abandoned degree behind her and a thirtieth birthday approaching, amateur writer Bonnie Falls moves out of her parents’ home into a nearby flat. Her landlady, Sylvia Slythe, takes an interest in Bonnie, encouraging her to finish one of her stories, in which a young woman moves to the seaside, where she comes under strange influences. As summer approaches, Sylvia suggests to Bonnie that, as neither of them has anyone else to go on holiday with, they should go away together – to the seaside, perhaps.


THE STORY COLLECTOR by EVIE GAUGHAN

A beautiful and mysterious historical romance from the author of The Heirloom and The Mysterious Bakery on Rue de Paris. Thornwood Village, 1910. Anna, a young farm girl, volunteers to help an intriguing American visitor, Harold Griffin-Krauss, translate 'fairy stories' from Irish to English. But all is not as it seems and Anna soon finds herself at the heart of a mystery that threatens the future of her community and her very way of life..... Captivated by the land of myth, folklore and superstition, Sarah Harper finds herself walking in the footsteps of Harold and Anna one hundred years later, unearthing dark secrets that both enchant and unnerve. The Story Collector treads the intriguing line between the everyday and the otherworldly, the seen and the unseen. With a taste for the magical in everyday life, Evie Gaughan's latest novel is full of ordinary characters with extraordinary tales to tell. Perfect for fans of Jess Kidd and Eowyn Ivey.

All wrapped up  and I'm still sane..... just!! Hope your bookish week has been good to you!