#BlogTour The Madonna of Bolton by Matt Cain #bookreview 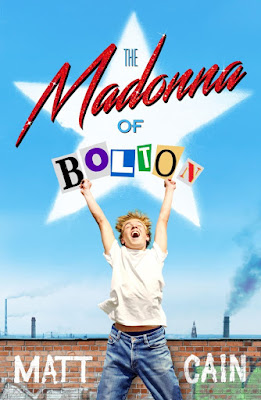 Extremely delighted to be taking part in the Blog Tour for this fantastic book - if you loved Madonna and the 1980's then you are going to love this book!! My thanks to the author, publisher and Anne of  Random Things Tours for letting me be part of it all!!

THE MADONNA OF BOLTON
Matt Cain

Charlie Matthews’ love story begins in a pebble-dashed house in suburban Bolton, at a time when most little boys want to grow up to be Michael Jackson, and girls want to be Princess Di. Remembering the Green Cross Code and getting out of football are the most important things in his life, until Auntie Jan gives him a gift that will last a lifetime: a seven-inch single called ‘Lucky Star’…
On his ninth birthday, Charlie discovers Madonna, and falls in love. His obsession sees him through some tough times in life: being persecuted at school, fitting in at a posh university, a glamorous career in London, finding boyfriends, getting rid of boyfriends, and family heartbreak. Madonna’s music and videos inspire him, and her fierce determination to succeed gives him the confidence to do the same – and, ultimately, to let go of his idol, and find his own voice.

Matt Cain was born in Bury and brought up in Bolton. He spent ten years making arts and entertainment programmes for ITV before stepping in front of the camera in 2010 to become Channel 4 News’ first ever culture editor. His first novel, Shot Through the Heart, was published in 2014 and his second, Nothing But Trouble, followed in 2015. As a journalist he has contributed articles to all the major UK newspapers and is currently Editor-in-Chief of Attitude, the UK's biggest-selling magazine for gay men, and its sister publication, Winq. In 2017 he was voted Diversity in Media’s Journalist of the Year. He lives in London.
www.mattcainwriter.com/@mattcainwriter

This was a real blast to read!! Full of so much pop history and retro mentions, I found myself constantly smiling and thinking back as we follow the story of Charlie and his love affair with the Queen of Pop herself - Madonna!He's a young boy in Bolton, who doesn't like football, much to the disappointment of his Dad and brother, so he has never fitted in but on his 9th birthday his Auntie buys him a 7" single of Lucky Star by Madonna, and he falls in love immediately! Playing the song over and over, he becomes obsessed with her every tv and magazine appearance and her songs and outlook on life help him through various tough times in his life.It deals with school bullying, friendships, sexuality, family relationships, university, work - and all that life can throw your way when you feel out of place. Charlie is the sort of character who gets on with things in his life, but would just like to be accepted for who he is and is lucky to find some friends along the way who share his passions and outlook. He's also a bit of a dreamer so he wants 'true love' and is often disappointed when new relationships aren't all red roses and walks on the beach!I loved how the story follows him from childhood through to his adult life and how his attempts to find happiness in his work and personal life are often mirrored by Madonna songs. Each chapter has a different song title and that alone had me singing each song in my head throughout! From the fun 'True Blue' cover, this is a perfect 'Holiday' read, or even a fab 'Bedtime Story' and it's a story that 'I'll Remember' and 'Cherish' - 'Take A Bow' Matt Cain!!

Don't forget to check out the other stops on the Blog Tour!! 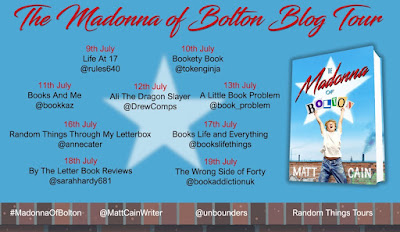