#BookReview The Book of M by Peng Shepherd #20booksofsummer 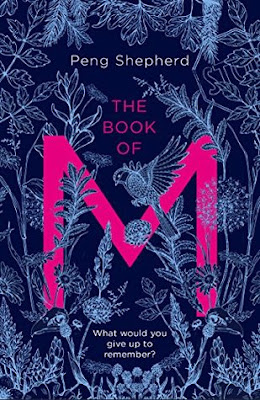 Set in a dangerous near future world, The Book of M tells the captivating story of a group of ordinary people caught in an extraordinary catastrophe who risk everything to save the ones they love. It is a sweeping debut that illuminates the power that memories have not only on the heart, but on the world itself.One afternoon at an outdoor market in India, a man’s shadow disappears—an occurrence science cannot explain. He is only the first. The phenomenon spreads like a plague, and while those afflicted gain a strange new power, it comes at a horrible price: the loss of all their memories.Ory and his wife Max have escaped the Forgetting so far by hiding in an abandoned hotel deep in the woods. Their new life feels almost normal, until one day Max’s shadow disappears too.Knowing that the more she forgets, the more dangerous she will become to Ory, Max runs away. But Ory refuses to give up the time they have left together. Desperate to find Max before her memory disappears completely, he follows her trail across a perilous, unrecognizable world, braving the threat of roaming bandits, the call to a new war being waged on the ruins of the capital, and the rise of a sinister cult that worships the shadowless.As they journey, each searches for answers: for Ory, about love, about survival, about hope; and for Max, about a new force growing in the south that may hold the cure.

For the first 40% of this book I was under its' spell! I was even getting ready to give it 5 stars! It was that engrossing, original and thought provoking! But then I found it started getting a little messy and my mind started to wander as I struggled to grasp what was going on! It did redeem itself again by the end as I found the conclusion quite satisfying and enjoyable - I just wish it could have all given me that feeling!

The concept of the story is stunningly simple and terrifying! People start to lose their shadows, and with it their memories go too as in this world it is your shadows that hold all your memories! Imagine not knowing how to open a door, remember loved ones.... and it starts spreading across the globe. There seems no rhyme or reason as to who or when it strikes so everybody is living in fear that it will happen to them and their nearest and dearest. In the book you follow a number of characters who have all been touched in some way by this horrifying development and I loved the early threads of how people were trying to survive. Max and Ory were two of the main characters who we followed as they scavenged to survive, living off one small meal a day and trying to work out a plan of action as to where to move on to next as each city began to become no go areas. Max had just lost her shadow so it was touching to see them deal with that and struggling to think past each day as to when her memories would completely go.

We also follow the story of Naz, a budding archer hoping for Olympic glory, and she becomes obsessed with TV coverage of Hemu, the first person to lose his shadow, and his story has the world transfixed. Naz is reunited with her sister as they try and find safe passage across the country and their quest isn't made any easier by never knowing who to trust as they travel as the world becomes very selfish and wary of everyone else. Neither the shadowed or shadowless could be trusted!

Overall I did enjoy this book, despite its' overcomplicated chapters and storylines. I would have just preferred it concentrating on the impact on humanity and the battle for survival without the added weirdness and confusing subplots!