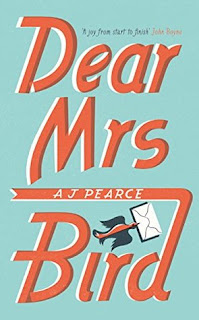 London, 1940. Emmeline Lake is Doing Her Bit for the war effort, volunteering as a telephone operator with the Auxiliary Fire Services. When Emmy sees an advertisement for a job at the London Evening Chronicle, her dreams of becoming a Lady War Correspondent suddenly seem achievable. But the job turns out to be working as a typist for the fierce and renowned advice columnist, Henrietta Bird. Emmy is disappointed, but gamely bucks up and buckles down.

Mrs. Bird is very clear: letters containing any Unpleasantness must go straight in the bin. But when Emmy reads poignant notes from women who may have Gone Too Far with the wrong men, or who can’t bear to let their children be evacuated, she is unable to resist responding. As the German planes make their nightly raids, and London picks up the smoldering pieces each morning, Emmy secretly begins to write back to the readers who have poured out their troubles.

Prepare to fall head over heels for Emmy and her best friend, Bunty, who are gutsy and spirited, even in the face of a terrible blow. The irrepressible Emmy keeps writing letters in this hilarious and enormously moving tale of friendship, the kindness of strangers, and ordinary people in extraordinary times.

Another one of those books that I couldn't put down once I picked it up! And this time it wasn't because of the twists or shocking reveals, but all down to the fact that it was such a charming and touching story of 2 friends and their experiences of living in London during the War, and how their perspectives of war were different from those on the frontline.Emmeline and Bunty are 2 friends, sharing a flat and have the kind of friendship goals we all aspire too! So supportive to one another which was much needed during the war with their other halves rarely around. Emmeline is a secretary but has designs on being a journalist and when she sees an advert for a junior at the local paper she goes for it!! Even her interview was quite eventful, but she was so swept up in the dream of being a journalist that she never really asked what the job entailed! So she is a little disappointed to find out she'll be typing up answers to problems that readers write in to the 'Women's Friend' periodical! The problem page is under the guardianship of Mrs Bird and what a character she is! The list of topics she refuses to answer problems about is seemingly endless! She doesn't do 'unpleasantness' as she calls it! So as Emmeline has to sort through the letters she is struck by how honest people are who write in and just want answers to the problems they face, mainly to do with relationships. So Emmeline takes it on herself to reply to some of these in person - risking her job and journalism dreams! It's all done with the best of intentions but she still worries if she ever gets found out.And all this goes on while London is under daily bombing risks so that perspective of life is greatly explored during this book. Having to take your gas masks with you where ever you go, and how life did carry on 'as normal' while the fear of watching neighbourhoods being destroyed was ever present. I just adored the characters in this - they were 'all round good eggs' as the saying goes! Thoughtful, helpful, considerate and always trying to do the right thing! I also loved the viewpoint of being a woman during the war, and how you were just expected to go about things as normal and to keep quiet if you ever had fears or doubts. For some the problem pages were the only way for them to share such intimate details and if they weren't getting answered, they had nowhere else to turn to.This book was full of such warmth, emotion and even humour - loved the image of them swearing at Hitler while bombs were dropping around them - and it just filled my heart with glee throughout!