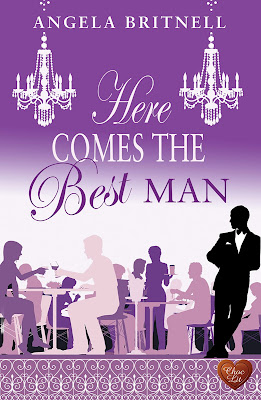 Being the best man is a lot to live up to … When troubled army veteran and musician Josh Robertson returns home to Nashville to be the best man at his younger brother Chad’s wedding he’s just sure that he’s going to mess it all up somehow. But when it becomes clear that the wedding might not be going to plan, it’s up to Josh and fellow guest Louise Giles to make sure that Chad and his wife-to-be Maggie get their perfect day. Can Josh be the best man his brother needs? And is there somebody else who is beginning to realise that Josh could be her ‘best man’ too?

Having been lucky enough to have read this at the manuscript stage as part of the Choc Lit Tasting Panel, it is absolutely wonderful to see it in its' final form and it still has  that sweet and swoonsome feel that won me over in the first place!!

Josh is the bad boy of the family in some eyes, so when he returns for his brothers wedding he is determined to prove to people they're wrong and hopefully make it through the time causing no problems!  He had served in the army and we get to see a little glimpse of his time in the army during the story and it really puts what he's been through in a new light.   When he meets Louise, who is over for the wedding with the English wedding party, he is immediately smitten and soon a touching bond between them grows.  Louise is such a lovely character as she's not part of the family involved with the wedding, but is the PA to the godmother of the bride, so she is used to sorting out problems and helping to organise things so it seems perfect for her to offer to help with some wedding plans that were running a bit behind!

You sense that Louise and Josh both have some trust issues, but it's fun to see them bouncing ideas off one another for the wedding and Josh is also a great host to show Louise different parts of town and she seems to have a really positive effect on his outlook on life now and he starts to look forward to new ventures.

This has such an easy feel to it that it was a pleasure to read!  Loved the setting and the little back stories that kept appearing to keep things interesting!  This is a sequel to The Wedding Reject Table, but can easily be read as a standalone.   Loved it!