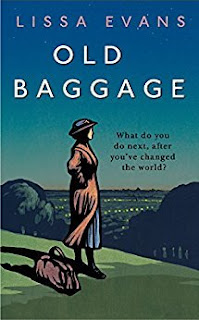 What do you do next, after you’ve changed the world?It is 1928. Matilda Simpkin, rooting through a cupboard, comes across a small wooden club – an old possession of hers, unseen for more than a decade.Mattie is a woman with a thrilling past and a chafingly uneventful present. During the Women’s Suffrage Campaign she was a militant. Jailed five times, she marched, sang, gave speeches, smashed windows and heckled Winston Churchill, and nothing – nothing – since then has had the same depth, the same excitement.Now in middle age, she is still looking for a fresh mould into which to pour her energies. Giving the wooden club a thoughtful twirl, she is struck by an idea – but what starts as a brilliantly idealistic plan is derailed by a connection with Mattie’s militant past, one which begins to threaten every principle that she stands for.Old Baggage is a funny and bittersweet portrait of a woman who has never, never given up the fight.

What an astonishing book!!

In Matilda Simpkins, there is a character with so much depth and background to explore - it's just that she has reached a point in her life where her past was a million more times exciting than her present! She used to be part of the suffragete movement and her time fighting for the rights of women saw her jailed a number of times, attending numerous marches and even heckling Churchill. And now in middle age she finds nothing even comes close to recreating that buzz and spark in her. The only enjoyment she seems to get out of life nowadays is passing on advice to neighbours - whether they want it or not!!

When she finds herself under the watch of the police again after a street robbery, she soon finds a new way of feeling involved in the world and inspiring a new generation of young girls to be educated and feel inspired to think more of themselves as she starts a Girls Club on Hampstead Heath, teaching them a variety of skills.

There are a number of other important characters we get to meet along the way - from Florrie 'The Flea' who lives with Mattie and is a dear friend and a calming influence on her friend, to Ida who is a young girl whose family expect very little from her other than to cook for her brothers at home, and they tease her when she shows an interest in wanting more out of life and for herself.

I found this to be such an inspiring read. We take so much for granted nowadays as women and it is always eye-opening to go back and look at the struggles women went through and to have a character of Mattie who is fearless, most of the time, is really enlightening and stirring. Mattie and Florrie have many times when their friendship is tested, there are fallings out, but it showed beautifully the bond they do share that when times are tough they are there for one another.

I loved spending time with these characters over the years in this book and highly recommend everyone to pick this book up and hopefully feel as proud and uplifted as I did after reading this!