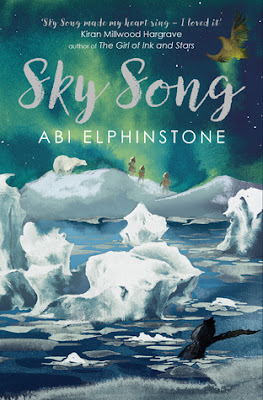 'A shimmering thrill-ride of a book. I loved every page.' Lauren St John 'Sky Song made my heart sing - I loved it!' Kiran Millwood Hargrave'A dazzling snowstorm of an adventure, with hope at its heart' Emma Carroll

About the book‘Abi Elphinstone’s books are full of adventure, wit, heart, and, above all, bravery’ Katherine Rundell‘Once an adventure digs its claws in, there is not an awful lot you can do about it. Especially when magic is involved . . .’ In the snowy kingdom of Erkenwald, whales glide between icebergs, wolves hunt on the tundra and polar bears roam the glaciers. But the people of this land aren’t so easy to find - because Erkenwald is ruled by an evil Ice Queen and the tribes must stay hidden or risk becoming her prisoners at Winterfang Palace.Join Eska, a girl who breaks free from a cursed music box, and Flint, a boy whose inventions could change the fate of Erkenwald forever, as they journey to the Never Cliffs and beyond in search of an ancient, almost forgotten, song with the power to force the Ice Queen back. This is a story about an eagle huntress, an inventor and an organ made of icicles. But it is also a story about belonging, even at the very edges of our world . . .

A stunning read, in the tradition of the classic children' stories, that had me under its' spell from the first page!It's the story of good vs evil! Poor Eska is trapped in a castle by the Ice Queen who is desperate for her to speak so she can feed on her voice to gain the immortality she craves. There is something different about Eska that leaves the Ice Queen to cherish her voice even more. But Eska knows nothing of her past as she has had her memories taken from her, so she is feeling alone but determined to be free.Flint is searching for his place in the world too. His brother is the chief of their tribe and Flint wants to do all he can to impress him. Even if that includes crazy schemes to break into the Palace to free their Ma! When he does break in he sees Eska who begs him to help her escape and his kind heart doesn't know how to say no.When they both flee the palace, we get to see their friendship bloom while they travel across dangerous territories. Eska just wants to know who she is and where she came from, while Flint is just desperate for his inventions to be praised by his brother.Add in some amazing animal guides, a magical and fantastical world, brave quests and adventures and you'll find that this is such a wonderful escapist read for those of all ages! It is full of courage and the message to believe in yourself and it was just a delight to read!