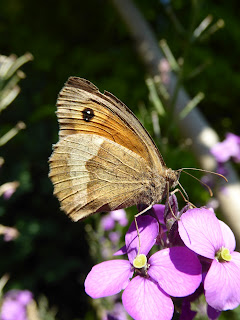 Hello!! Hope the world is treating you well this week! The sun continues to shine here and we've had my nephew here to stay for a few days so reading has been placed on the back burner for a while!  Was lovely spending time with him, even if he did beat me at Crazy Golf! I need to practice more!!

On the reading front there has been a rare occurrence in my bookish world... a DNF book!!  I'm normally one of those readers that HAS to finish everything I pick up! But with so many books to read, I've decided to be more ruthless and give up on books that I'm not enjoying! Life is too short to read books you don't like!  Feels quite liberating! Hope this doesn't start me off not wanting to finish more though!

So with less reading time this week I've managed to finish 4 books and that 1 DNF! Been restrained on the book haul front too and I was forced (!) to buy 2 boks from the fab Eye Books who were selling their books last weekend for half price!  I've always been impressed by books they've published so it would have been rude of me to take advantage of such an offer!

Loved this unique love story told back to front! Got tears in my eyes during Chapter One!

A stunning story that I read via The Pigeonhole app! A must read!!

A book with a great first half, let down by the second half! Still enjoyed it though!

I love Jenny Colgan and this was another wonderful story from her!

Very disappointed that I didn't get on with this, as I adored The Little Paris Bookshop which was her previous book. Gave up after about 70 pages.

Got these two from Eye Books in their half price sale! 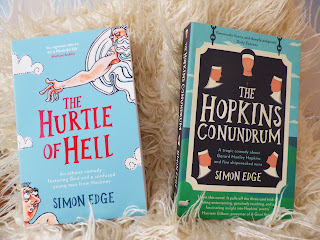 The Hurtle of Hell by Simon Edge

When gay, pleasure-seeking Stefano Cartwright is almost killed by a wave while at the beach, his journey up a tunnel of light convinces him that God exists after all, and he may need to change his ways if he is not to end up in hell. When God happens to look down his celestial telescope and see Stefano, he is obliged to pay unprecedented attention to an obscure planet in a distant galaxy, and ends up on the greatest adventure of his multi-eon existence. The Hurtle of Hell combines a tender, human story of rejection and reconnection with an utterly original and often very funny theological thought-experiment, in an entrancing fable that is both mischievous and big-hearted.

The Hopkins Conundrum by Simon Edge

Tim Cleverley inherits a failing pub in Wales, which he plans to rescue by enlisting an American pulp novelist to concoct an entirely fabricated "mystery" about Gerald Manley Hopkins, who composed "The Wreck of the Deutschland" nearby. Blending the real stories of Hopkins and the shipwrecked nuns he wrote about with a contemporary love story, while casting a wry eye on the Dan Brown industry, The Hopkins Conundrum is a highly original mix of commercial fiction, literary biography, and satirical commentary.

And then I received this ahead of a Blog Tour in |August - and am very excited!! I loved The Bear and The Nightingale so can't wait to read more!

The Girl in the Tower by Katherine Arden  (Winternight Trilogy #2) The incredible adventure begun in The Bear and the Nightingale continues as brave Vasya, now a young woman, is forced to choose between marriage or life in a convent and instead flees her home - but soon finds herself called upon to help defend the city of Moscow when it comes under siege.Reports have reached the Grand Prince of Moscow that his countryside is plagued by bandits who appear out of nowhere to burn the villages and kidnap its daughters. Determined to catch the men no one has been able to track, he sets out with his trusted friend, Sasha, a priest with a warrior's training. The party travels for many days but is unable to find a trace of the raiders, until they come across a young boy riding alone on a magnificent horse who claims he has seen them and can find the trail. Sasha is shocked to recognise the boy as his younger sister, thought to be dead or a witch by her village and riding in disguise. But when Vasya proves herself in battle, riding with remarkable skill and inexplicable power, Sasha realises he must keep her secret as she may be the only way to save the city from threats both human and fantastical.

The Daughter of River Valley by Victoria Cornwall

I hope your bookish week has been a fun one!!