#BlogTour Ribbons in her hair by Colette McCormick #GuestPost 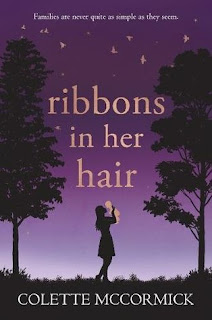 Delighted to be hosting the first stop on this blog tour for Ribbons in my hair. My thanks to Accent Press and Colette McCormick for letting me share in this wonderful blog tour and kicking it all off with a lovely guest post from the author herself.

Jean seems the perfect wife and mother but she struggles to love her daughters whose material comforts mask emotional neglect. When the youngest daughter, Susan, brings 'shame' on the family, Jean can think of only one response. She has to make the problem disappear. Finding the strength to stand up to her mother for the first time in her life, Susan does the only thing that she can to save her baby. What Susan doesn't realise is that her mother's emotional distance hides a dark secret of her own. Examining the divide between generations, between mothers and daughters, this emotionally charged novel asks whether we can ever truly understand another, however close our ties.

Handing over to Colette now as she shares her thoughts on what she hoped the book would be and the inspiration behind it.

At the beginning of Ribbons in Her Hair I focused on Susan, the little girl who felt alone and unloved. I wanted her to tell the reader her story in her own words. She tells us how it feels when her mother has no time for her and her sisters ignore her. But, as we all know, there are always two sides to every story and I also wanted to look at what would make her mother behave the way she does.
To the outside world Jean appears to be the perfect wife and mother. She keeps a tidy house; her children are always clean and well fed and her husband always comes home from work to a meal on the table. So why is she so emotionally detached?
I wanted Jean to tell us her side of the story too. What was it that made her behave the way that she did? Was she really the mother that her daughters thought she was?
I really didn’t want to like Jean but, as I wrote her story I started to understand her a bit more. Was it really her fault or was she merely a product of her own childhood? We only see Jean’s mother briefly but I think that’s enough to know where she got her mothering skills from. When Jean needed her mother’s support it wasn’t there so should we be surprised when she behaves the same way?

Another line I wanted to pursue was how mother and daughter, a generation apart, would deal with the age-old problem of what to do when you are pregnant and unmarried. The shame was enormous in the 1950’s and had things changed that much nearly thirty years later? Maybe it had for some but not for Jean. Having said that, when Jean tried to make the problem go away was she, in her own mind, trying to do what she thought was best for her daughter?

The main thing that I wanted to look at in this book though was the mother/daughter relationship. I am a mother and a daughter but I am not the mother of a daughter. I do however have a lot of friends with daughters so I can see that its rarely a straightforward thing at the best of times. Throw secrets and lies into the equation and you have a recipe for maybe not disaster but certainly for misunderstandings.

Jean came to life in my head following a conversation with someone whose mother was just like Susan’s and this surprised me because being on the outside, as I was, I had no idea. What has surprised me more though is that as I’ve been talking to other women about my book a lot of them have told me that their mothers were the same. This makes me appreciate not only my own mother but also my sister all the more. They were the women that put the metaphorical ribbons in my hair and that is why this book is dedicated to them.

Don't forget to check out the other stops on the tour! Thank you for stopping by today! 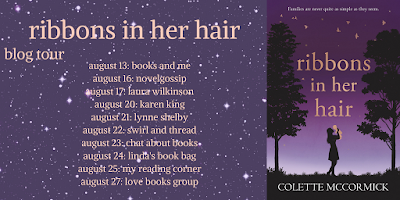