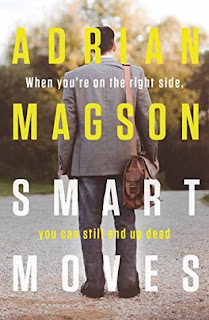 Extremely delighted to be taking part in the Blog Tour for SMART MOVES by Adrian Magson. My thanks to the author and publisher for letting me be part of it all!

And as well as my thoughts on the book, I'm also lucky to have a guest post from Adrian himself for you all to enjoy!!

International troubleshooter Jake Foreman loses his job, house and wife all in one day. And when an impulsive move lands him in even deeper water - the kind that could lose him his life - he decides it's time to make some smart decisions.The trouble is, knowing the right moves and making them is a whole different game. And Jake, who has been happily rubbing along things he always suspected were just a shade away from being dodgy, finds it all too easy to go with the flow. Now he's got to start learning new tricks.If he doesn't, he could end up dead.

‘a classic crime star in the making’ (Daily Mail) - is the author of 22 crime and spy thrillers, a ghost novel and 'Write On!' - a writers’ help book. His latest novels are 'Rocco and the Nightingale’ (Oct 2017) the fifth in the Insp Lucas Rocco series set in 1960s France, and ‘Smart Moves’ (Aug 2018) – a standalone novel. Both are published by The Dome Press. When not writing books, he’s a reviewer for Shots Magazine and writes the ‘Beginners’ and ‘New Author’ pages for Writing Magazine (UK).

Over to you Adrian!!

HUMOUR MAKES THE WORLD GO AROUND

Many years ago, before I got my first book deal, I used to write short stories and comedy material for radio. I also wrote humorous slogans for greetings cards, beer mats, welcome mats and t-shirts. Show me a surface back then, it seemed, and I’d have a go at writing something to go on it. Maybe I was a budding graffito artist and never knew it.
I also wrote short fiction and features for mostly women’s magazines here and overseas. Hundreds of them. They were all part of my writing journey while trying to get the all-important book deal. For a while these non-book activities served me well, helping keep my optimism, ambition (and bank balance) on the up while focussing on making a career out of writing. But useful and enjoyable as it was, short fiction and comedy weren’t what I really wanted to do. The comedy field especially was fiercely competitive, demanding a close finger on the button of contemporary news and lots of submissions to get noticed.
It was a great learning curve, and perhaps because of it, I find most of my writing contains a vein of humour. But it has to be finely judged so as not to get in the way. Most of my books involve the world of crime or spying, so trying to inject a chuckle at the wrong moment in those genres can jangle.
Maybe that’s why recently I decided to do two things I hadn’t done before: the first was to write a standalone after years of writing series novels. The second was to aim for a humorous story. Not a laugh-a minute kind, but more in the situations being described.
In ‘Smart Moves’, international corporate trouble-shooter Jake Foreman is trying to make a success out of a misfortune largely of his own making. He’s basically stuffed up in a big way by spending too much time rolling around the world and losing touch with what was important in life, like relationships, friends and even the changing world around him. In short, he’s lost it all: his wife, home and job.
Describing someone else’s close shaves with bad luck and misery has a tragicomic appeal, because you want the central character to come out okay. I didn’t set out to get belly laughs, but I hope I managed to inspire a few smiles along the way.

Huge thank you to the publishers for the advanced copy of this book.  I know I can always trust them for a story full of quality and intrigue and this is exactly what I got with this story.

The main character, Jake, is having a very bad day! The worst kind of bad days!  All he has known for a number of yeas has ended so he needs to think fast and get a new life plan! He's been let go from work, his wife has left him, and there's squatters in his home!!

The more he uncovers about the kind of work he was doing before is a little troubling to him - he's  been a little naive to say the least! - so when he's offered new opportunities in the 'courier service' he grabs at it! He knows he's good at it so it makes sense to carry on with what he knows! He seems to care less for the consequences this may bring his way!

Add to the mix, a mess of a personal life and his life begins to spiral a little out of control and, as a reader, you just wonder what he'll be facing next and where!

This was a fast paced thriller, that felt very fresh to read and the subtle mix of humour worked really well! There was always something going on and I found myself enjoying getting to know Jake as a character and how he had to start thinking on his feet to save himself and those around him!