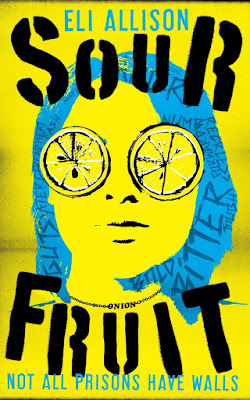 Extremely delighted to be the latest stop on the Blog Tour for SOUR FRUIT by ELI ALLISON! Prepare to encounter a very dark world of citizens with rights and those with none!!

My thanks to the author, publisher and Anne of Random Things Tours for inviting me to be part of it all!

In a not too distant future, people are split into either Citizens with rights or VOIDs with nothing. Forced to live in the former port, the VOIDs have adapted to the floods; the brutal nature of life outside of society however, is not so easy.

Onion is snatched. Which is proper shit because she still had nearly twenty quid left on her Angry Slut Teen Clothing gift card and now she was never going to get those flamingo-pink leather chaps she’d been eyeing up. She wakes up chained to an armpit of a river city, earmarked for a skin-trader called The Toymaker. Surrounded by a creeping rot she has just three days to escape before the sold sticker becomes a brand.

Forced into a knife fight with a world that has just pulled an AK47 on her, all Onion has to fight with is; a sewer for a mouth, a rusted up moral compass and a spanking anger that can sucker-punch kindness at twenty paces. She might survive but probably not.

Sour Fruit is a dark dystopian novel set in northern Britain, in a river city called Kingston; a rotting scrap yard of misery. The VOIDs are forced to live there not by walls or fences but by being invisible in the new digital world.

The novel explores ideas about what is home, how friendship can come from strange places and the debts we can’t ever pay back 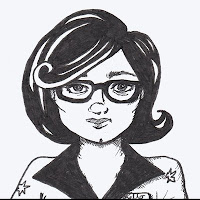 Eli Allison tells people at parties that she's a writer, but she mostly spends the day in her knickers swearing at the laptop. She has never written anything of any fame except for a jarringly bad poem which was read out loud at her secondary school assembly (the highlight of everyone else’s school year, predictably not her own). She gave up poetry and switched to the hard stuff soon after. Writing stories about crushed dreams and balding men looking for love that you could buy by the hour. Those were her happier ones. She ping-ponged between one depressing job after another until her husband said, ‘take a year and write your book’. Years later the book is done…There is a sneaking suspicion he would have kept quiet had he known quite how long it would have taken her.
She lives in Yorkshire, works in her head and does not enjoy long walks on the beach or anywhere, in fact she gets upset at having to walk to the fridge for cheese. She suffers badly from cheese sweats but endures.


With the world we live in currently in a 'little bit of a mess' I wondered how this dark, dystopian novel would play out on the pages and I have to admit to being impressed with how quickly I adjusted to life in this world of the VOID's who have nothing, and the citizens who have rights!  This is a messed up world that Onion finds herself part of, and therefore there are a lot of messed up characters throughout!  And that appealed to me! They weren't perfect, they were often very sweary (I do like a sweary character!!) BUT they were there for one another when times were extremely tough and that was so  touching considering what Onion and those around her were put through at times.

The plot is a little bit out there and sometimes I found it a little confusing, but the dark humour throughout  had me laughing out loud on many an occasion and that  really helped pull the story together for me and made me so invested in the characters and their plight! Life is a struggle for these characters but it brings out the best in  some of them -  it also brings out the worst in others and there are some characters who are total slimebags!

As Onion and Rhea find themselves in various situations, their concern for one another was quite endearing, and this was another way you got to see the different sides of the characters  - beneath the swagger and the swearing there was just a normal girl trying her best to live life the only way she knows how.

I always like to discover new authors and different types of stories and Sour Fruit has been a wonderful introduction to a fascinating genre and exciting new author!  Highly recommended!!

Please don't forget to check out the other stops on the Blog Tour for more thoughts and information! 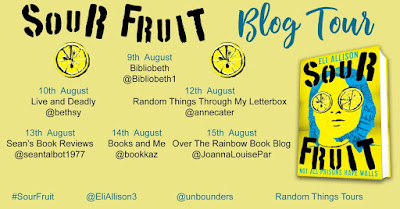