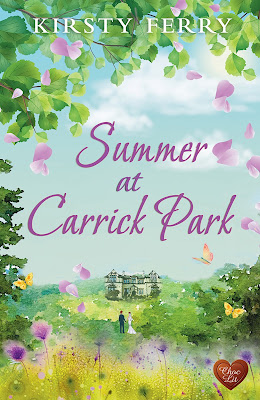 A summer wedding, fifty cupcakes and a man she thought she would never see again … When Joel Leicester walks into the hotel where Rosa Tempest works, she can’t believe her bad luck. Out of all the hotels in all of North Yorkshire, the man who broke her heart would have to walk into Carrick Park! The last time Rosa saw Joel it was after a whirlwind holiday when they’d been greeted at his flat by a woman claiming to be his fiancée. Rosa never stuck around to hear Joel’s side of the story but now, six years later on, Fate has another trick up its sleeve as a potentially disastrous summer wedding at Carrick Park can only be saved by Joel and Rosa working together …

I found this to be a fabulous novella! Just one word of warning - don't read this on an empty stomach! The description of cakes will have you drooling and feeling rather peckish!!

It's the story of Rosa Tempest, and features the Carrick Park hotel which is first seen in Some Veil Did Fall by Kirsty Ferry, as well as her Xmas novella 'A little bit of Christmas Magic' - but this is just as wonderful a read as a standalone story! Rosa is such a lovely character, sweet, hardworking - she's the senior receptionist at the hotel - and rather ace at baking cakes! She's also nursing a broken heart so is glad to have work - and cakes - to focus on!

But her past soon comes walking back into her life when her ex, Joel, walks through the doors of the hotel as he's the best man for his pal Luke who is seen to marry Erica at the hotel.  Joel never got a chance to explain to Rosa just exactly what happened that night when she ran away from their romantic getaway - she even got her friends and family to lie for her when he tried to track her down to explain his side of the story - so maybe now is the chance for the truth to come out?!

But first they have to deal with a wedding disaster, and that can only be fixed by spending time together! Will it give them a chance to reconnect?!

I really enjoyed how this book flashes back to 6 years ago when Rosa and Joel first got together, as it gives you the chance to  see their story from the beginning!  I loved reading about their past and just wish there was more of this story as I could have easily spent more time in their company - and reading about cakes!!

A delicious treat for all!!