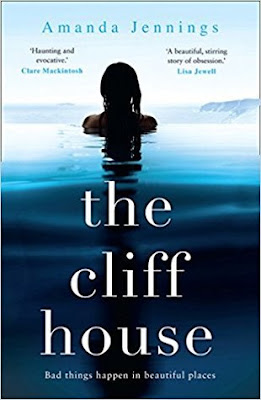 ‘Haunting and evocative – you’ll want the Cliff House for your own’ Clare MackintoshSome friendships are made to be brokenCornwall, summer of 1986.The Davenports, with their fast cars and glamorous clothes, living the dream in a breathtaking house overlooking the sea.If only… thinks sixteen-year-old Tamsyn, her binoculars trained on the perfect family in their perfect home.If only her life was as perfect as theirs.If only Edie Davenport would be her friend.If only she lived at The Cliff House…Amanda Jennings weaves a haunting tale of obsession, loss and longing, set against the brooding North Cornish coastline, destined to stay with readers long after the final page is turned

If you love your books dark and unnerving, then look no further! This was a fabulously gripping read that I just couldn't put down as you just kept wondering how it was all going to pan out! It just showed how the nature of obsession can completely take over until it's all too late!Tamsyn became obsessed with The Cliff House through her late, beloved father. They used to creep in and spend time there together and it became a dream world for her. Then when a new family - The Davenports - moved in, she started to watch over the house and their movements and imagine their lives being one of perfection. One she soon finds out isn't quite as perfect as she imagined. She soon befriends their daughter, Edie, who is bored out of her mind over the holidays and is happy to have a new friend. Even though they are from such different backgrounds they quickly bond and Tamsyn begins to spend most of her days at The Cliff House.The Davenports seemingly have it all, but in reality they have nothing. Jealousy, addiction and misery is the reality of their lives and once Tamsyn and her family are on their radar, then they are soon dragged into their drama and it becomes increasingly dark for all concerned.I love the way the story flowed in this one - it didn't dive in straight in with all the secrets and reveals. It allowed you to get a take on each character before something new was injected into their past which made you think completely differently about them. It's full of teenage angst, as well as badly behaved parents and the phrase 'the grass isn't always greener on the other side' seems particularly apt for this story! What we perceive as someone living a perfect life doesn't always necessary turn out to be the truth!It cleverly shows how various demons can destroy families - be that grief or addiction - and how things quickly spiral out of control when someone is consumed by their thoughts and don't look at a situation with a clear mind. Highly recommended!!

My thanks to the author and publisher for the early review copy which they sent in return for a fair and honest review.