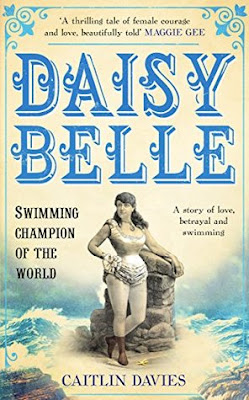 Summer 1867: four-year-old Daisy Belle is about to make her debut at the Lambeth Baths in London. Her father, swimming professor Jeffery Belle, is introducing his Family of Frogs - and Daisy is the star attraction. By the end of that day, she has only one ambition in life: she will be the greatest female swimmer in the world.   She will race down the Thames, float in a whale tank, and challenge a man to a 70-foot high dive. And then she will set sail for America to swim across New York Harbour.   But Victorian women weren’t supposed to swim, and Daisy Belle will have to fight every stroke of the way if she wants her dreams to come true.   Inspired by the careers of Victorian champions Agnes Beckwith and Annie Luker, Daisy Belle is a story of courage and survival and a tribute to the swimmers of yesteryear.

I got to read this via Pigeonhole, which is a free app that allows you to read along in daily segments and interact with other readers and the author - a fun and refreshing new way to enjoy a book!And what a story this was to enjoy! In Daisy Belle there is a character who is full of spirit and shows no fear when it comes to swimming and diving from a very early age. Which was extremely rare of the time as young girls and women weren't encouraged to swim. It was strictly for men. But her father sees the pound signs in showing off the attraction of a young female swimmer, so Daisy is trained alongside her brother and pushed into a number of shows in a variety of locations. Daisy idolises her father so sees nothing wrong in his plan, but her mother is aghast that her daughter is even swimming and doesn't even go to watch her swim. Something that is very difficult to understand in our modern world.The more attention that Daisy gets, the more her father pushes her to the limit and she finally sees him in a different light. As she grows up too, she is also becoming more aware of the world around her and seeing how those worlds try and compete was fascinating to read and you wondered what lay next in store for her.I really enjoyed the settings of this story, and the attention to detail transported you back so you could really embrace all that Daisy encountered - from the sea to the pool and to the attitudes of men and women to this astonishing young swimmer and her exploits. Daisy was such an inspiring character and even when her perfect world appeared shattered, she always found a way to pick herself up and start again. A fabulously spirited story!