#BookReview A House of Ghosts by W.C Ryan 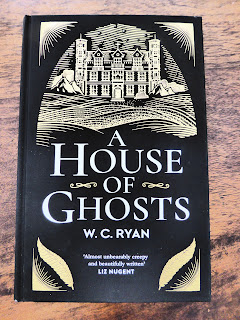 A gripping mystery with a classic feel: And Then There Were None meets The Silent Companions.Winter 1917. As the First World War enters its most brutal phase, back home in England, everyone is seeking answers to the darkness that has seeped into their lives. At Blackwater Abbey, on an island off the Devon coast, Lord Highmount has arranged a spiritualist gathering to contact his two sons who were lost in the conflict. But as his guests begin to arrive, it gradually becomes clear that each has something they would rather keep hidden. Then, when a storm descends on the island, the guests will find themselves trapped. Soon one of their number will die. For Blackwater Abbey is haunted in more ways than one . . . An unrelentingly gripping mystery packed with twists and turns, A House of Ghosts is the perfect chilling read this winter.

👻👻👻'Almost unbearably creepy and beautifully written' Liz Nugent, bestseller author of LYING IN WAIT'A splendid tale of wartime skullduggery, featuring both kinds of spooks - perfect fireside reading' Mick Herron, CWA Gold Dagger Award Winning author of DEAD LIONS'Hugely enjoyable, A House of Ghosts has the bones of a taut thriller wrapped up in the gorgeous romance of its ghostly island setting' Jane Casey'Perfect for a dark and stormy evening: a truly creepy and ingenious ghost story and murder mystery with an irresistible setting' Ragnar Jonasson

This is an eerie and engrossing story set against the backdrop of The First World War, and featuring the imposing Blackwater Abbey where Lord Highmount has lived for many years with his family, and has now invited a select few to join him for a weekend to contact the spirits so he and his wife can reconnect with those he has lost.I knew very little of this book going in, other than it has a stunning and striking cover, and within a few pages I found myself captivated by the setting of this home sitting on an Island off the Devon Coast, and the mixture of characters who all found themselves heading there for a paranormal weekend. The story is mainly told from the points of view of Lord Highmount, Kate and Donovan who have their own very mysterious backgrounds of which you learn more about as the story unfolds. Kate is such a fascinating character. Working in intelligence,she is selected by her boss to go on this weekend to gain some valuable knowledge from some of the other guests, alongside her ex fiancee! Not a ideal set up! She has a history with the Highmount family too so that makes it an even more difficult task for her to complete. She is being looked after by another interesting character, Donovan, who is also there to oversee the goings on but from the servants side of things. They find they soon have more to investigate when one of the party is killed!Kate also has the ability to see ghosts so while she is at Blackwater Abbey she is continually seeing things that others don't and this adds another intriguing element to the mix in this story! It really blends the mix of the supernatural, history and mystery so well together. It's one of those books that you can form your own opinion on a variety of characters as you read, working out who is trustworthy and who to be wary of. I know I was proved wrong on a number of occasions as to who I trusted!The seances seem to change the sceptics minds amongst them but it also sets off a chain of darker events and this keeps you with that very unsettled feeling as you read. It's one of those books that you read that really draws you into that world, as if you're a fly on the wall overseeing all that happens around you and I loved the escapism that this story helps create. A really enjoyable read!

My thanks to the publisher and Readers First for the advanced reading copy in return for a fair and honest review.
Posted by Books and Me! at Friday, September 28, 2018