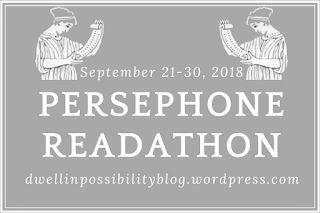 Sad to see another Persephone Readathon come to an end - thanks to Jessie at Dwell In Possibility for hosting another wonderful spell of reading! Hope there'll be another one very soon!

Had hoped to read 2 Persephone books this time round, but just managed the one as had too many other books to read. But it was a goodie so made the time fly by and so enjoyable! It ended up being my bedtime read and I was eager to get to bed every night just to read some more!

THE RUNAWAY by ELIZABETH ANNA HART 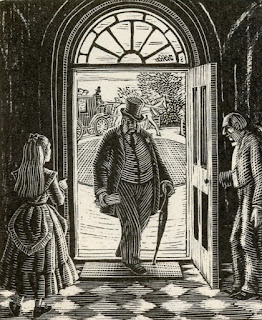 This 1872 novel by a mid-Victorian poet and novelist is about a girl named Clarice, living with her widowed father and her governess 'in a charming home at a convenient (railway) distance from the city.' One day she finds a girl of her own age hiding in the shrubbery. She is Olga and 'there is no question that she is the liveliest child character in English fiction' said the Observer in 1936

A sweet and charming read which is definitely lifted by the inclusion of some beautiful illustrations that work so well with the storyline.Clarice is a young girl who likes to do things the right way and isn't one to 'play up' but when she finds a runaway hiding in the grounds, she starts telling lies for the first time in her life to help keep Olga a secret, hidden away in her closet while trying to make her do the right thing and return home and let her family know where she is. Olga is a peculiar and feisty young girl - she has run away as she's not happy but keeping quiet isn't her greatest forte so she likes to play tricks on the members of the household where Clarice lives, despite Clarice telling her to stay quiet and hidden! It doesn't seem in her nature to do so and causes members of the staff to worry there's strange things going on in the house.This was lots of fun to read and would suit readers of all ages! It has that innocence about it that was refreshing to read and is one of the sweetest books I've read in quite a while!