#BookReview Under the Wig by William Clegg QC #memoir #nonfiction 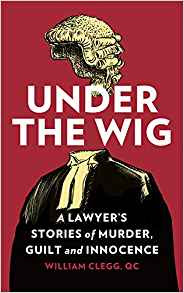 How do you chat to someone accused of a savage murder? Or prepare a court case? Or sway a jury?Step into the shoes of criminal barrister William Clegg as he meets clients in prison, works out weaknesses in the other side s case, and confronts witnesses at tense trials.In a revealing memoir, he revisits fourteen of his most intriguing briefs, from the murder charge facing Colin Stagg to the shooting of Jill Dando, to the first prosecution under the Nazi war crimes act and the burglar jailed for life by an earprint.All the while he lays bare the secrets of his profession, from the rivalry among barristers to the moments before a verdict comes back and how system of justice risks jailing you wrongly.Under the Wig is for anyone who wants to know the reality of fighting a murder trial. Switch off the TV drama and plunge into the criminal law in action.

We've all seen the TV shows about law and wondered what goes on in the world of 'real' lawyers, and this book is a truly fascinating look behind the scenes thanks to one of London's top murder case lawyers as he looks back at a remarkable career and shares his stories of all he has seen over the years. And when you've been involved in as many high profile cases as William Clegg has, then there's lots to share!From how he started in the world of law, to going behind the scenes at some of the most infamous trials he was involved in, I found this to be such an interesting read. He shares a number of outspoken opinions on cases he's been involved in as well as his thoughts on the system as it is and the many changes he's seen take place over the years - not all for the best! - as well as how technology has changed working on each cases. No such thing as the internet when he first started out!From war criminals, murderers, the wrongly accused, and fraud cases, this is a book that covers a wide range of dealings inside the world of law and the grim reality of brutal cases which show it isn't like it is on TV. The way the book plays out works so well as it spotlights high profile cases he was involved in, alongside his humble beginnings and how he worked his way up. There are flashes of humour that lighten the tone of the book and helped make it a really engrossing read.
My thanks to the author, publisher and publicist Emma Finnigan for an advanced readers copy in return for a fair and honest review.