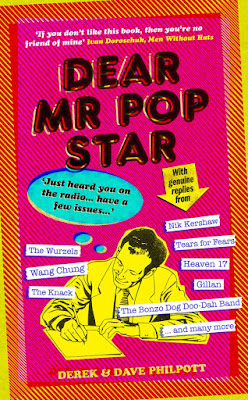 It's a very happy Publication Day to DEAR MR POP STAR by DEREK & DAVE PHILPOTT.  I always love to share news of books that are brought to life by the fabulous UNBOUND  website, and anything to do with music associated with the 1980's has  a special place in  my heart!! This is one book I'm so looking forward to reading very soon! 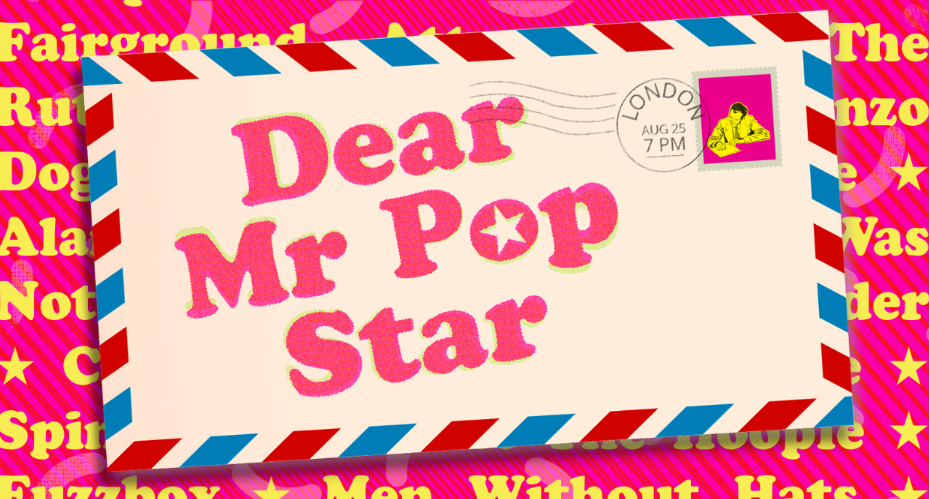 For nearly 10 years, ‘Team Philpott’, as their followers fondly refer to them, have been on a quite bonkers crusade, writing old-fashioned letters to pop and rock stars, picking up on genuine ambiguities within their lyrics or often deliberately misunderstanding them for comedic effect.

The letters are eminently publishable in their own right, mixing sharp wit, confusion, and mundane daily chores with trips to the shops, daytime telly, Derek’s legs playing up, and unarguable logic in relation to questioning the offending chart hits under scrutiny.

What makes this project especially deserving of attention, however, is that it has achieved a feat never before attempted or probably even thought of. The artists quite unexpectedly started to reply, writing back in just as witty and articulate a fashion, politely pointing out exactly where the original letter went wrong...or right.

Also, crucially, nearly all of the responses were procured via ''the back door of the industry'', via roadies, mutual fans, cousins of bass players, and even other famous participants telling the artists directly of the Philpotts’ written pressing inquiries. This marvellous online community, which stretched as far afield as Europe, Canada, Japan, the U.S.A, Australia and Stoke, even cultivated and organically evolved the whole surreal venture by offering up willing stars that the authors would probably not have thought of.

Under pressure from fans to go to print, a staggeringly successful Kickstarter Campaign in 2015 raised over 18k in order to self-publish, resulting in a wonderfully impressive book which went out to the hundreds of pledgers and was met with great acclaim before being made available via Amazon prompting nearly 100 five star reviews from avid readers.

Now the Authors are delighted to have been accepted by renowned publishing house Unbound. The new, second book  ‘‘Dear Mr. Pop Star’’ will also benefit from a trade edition being distributed by Penguin Random House. The book features nearly 100 of the best letters and responses from famous and legendary names spanning the whole pop and rock spectrum, all relishing their involvement and revealing their own, in many cases, hitherto unknown humorous sides within what could well be the most interactive dialogue compiled between music stars and their audience ever undertaken. Of course, it is not always possible to reach certain targets, hence many unanswered observations are also included, as they were considered too amusing not to be.

Ultimately, this book explores how when a song is released into ‘the wild’ the artist loses all control over it, especially pertaining to its interpretation. It is also testimony to the community spirit capable of being created over social media and how positive and fun it can be. 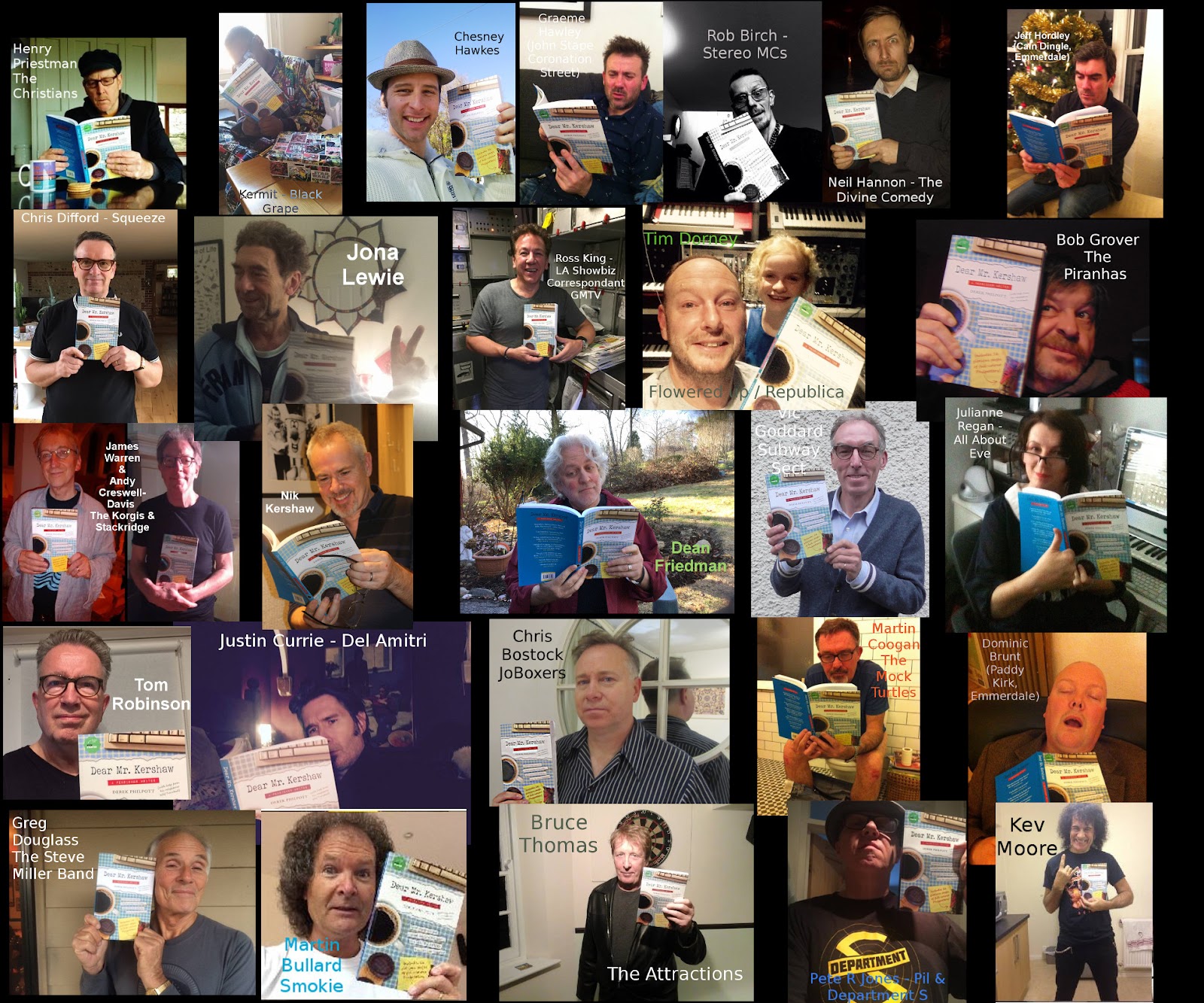 ‘’Team Philpott’s masterful oeuvre, with their infallibly astute and uncannily insightful interpretation of popular songs, has raised the world of pop-music criticism to the level of ‘high’ literary art! (Which is also the recommended state for fully appreciating their comic genius!)’’  Dean Friedman

‘’Thanks for the brilliant work and for allowing me to fence with such a couple of formidable comic swordsmen'' David Was, Was Not Was

''Thank you for your letter. It has changed my life. I folded it up and used it to stop my coffee table from wobbling'' Stan Cullimore, The Housemartins

''....a gateway between our normal glamorous botoxed lives and your mundane world – a lovely post-modernist way of us bonding'' Dr. & The Medics

"I meant every word of it. At least I think I did." Richard Jobson, The Skids

''I have passed your letter on to my lawyer, a restraining order will shortly be in place. Let that be the end of it. What wonderful madness'' Glenn Gregory, Heaven 17

''If you don't like this book, then you're no friend of mine''
Ivan, Men Without Hats

"These remarkable pedants have been the bane of my life in recent years; one can only wonder at what they would possibly glean from such works as T.S. Eliot's "The Wasteland", or "The Ballad Of Tam O'Shanter" by the great bard Burns his self. On behalf of all concerned, please don't do a poetry book, we implore you. Well done again and all the very best.’’
Jo Callis (Mrs.) On behalf of The Human League (also Mrs.).

"'My oh my Derek', when this is over then 'Everyday will 'hurt' without you!! I need to pick me up a Strange Little Girl!  xx’’
Dave, Sad Cafe

‘’I can only repeat my response to your last enquiry on this subject: I'm sorry, but I am NOT interested in purchasing your book, "comic" though it may be.   I trust this puts an end to the matter, and I will have no need to write you a third ti-- oh, wait a second, I might have gotten...Congrats on your new book!
Eagerly awaiting my copy, I remain as ever…’’
Berton Averre, The Knack’’

''It's not often the drummer in the band gets to speak, apart from "Where's my bleedin'  wages ?". So thank you chaps for the opportunity to spout off a load of ol' drivel for your hilarious project. The pleasure was all mine.'' Gary Long, Tadpole Tuna

''In which I answer the musical question...erm...what was the question?" Chris Butler, The Waitresses

“It was a thrill to receive your enquiry and an honour to be able to respond” Will Birch, Kursaal Flyers