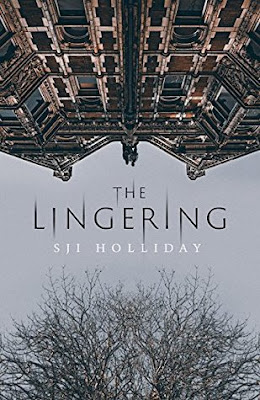 Married couple Jack and Ali Gardiner move to a self-sufficient spiritual commune in the English Fens, desperate for fresh start. The local village is known for the witches who once resided there and Rosalind House, where the commune has been established, is a former psychiatric home, with a disturbing history.When Jack and Ali arrive, a chain of unexpected and unexplained events is set off, and it becomes clear that they are not all that they seem. As the residents become twitchy, and the villagers suspicious, events from the past come back to haunt them, and someone is seeking retribution…At once an unnerving mystery, a chilling thriller and a dark and superbly wrought ghost story, The Lingering is an exceptionally plotted, terrifying and tantalisingly twisted novel by one of the most exciting authors in the genre.

Blimey that was rather brilliant!! And creepy AF!! I think the moral of this story is 'trust nobody'. Oh, and don't ever take a bath.......ever, ever again!!!The Lingering is a (very!) twisted supernatural crime story. We are introduced to Jack and Ali Gardner who decide to leave their old life behind to begin again at a self sufficient commune. The village they move to has link to witchcraft and the locals are well aware of the stories and history. Even Rosalind House where the commune has set up used to be a psychiatric home - so the level of creepiness around the area is bound to be high!The move is equally liberating and terrifying for them both. But it's Jack who seems to settle into the routine of life there quicker than Ali. She seems permanently on edge around the others and reluctant to fully embrace the commune life to begin with. She seems quite an insecure personality and doesn't like to be left alone, whereas Jack is happy to throw himself into various projects. It becomes clear they have moved here to escape things that have happened in the past - never an easy thing to do.Angela is one of the commune residents and their resident 'ghostbuster'! She's determined to capture spooky activity on camera and she is equally wary of the new residents but goes out of her way to be friendly. Something that isn't always reciprocated. There's also flashbacks throughout to a journal from 1955 from a Doctor who worked at the hospital and witnessed some very strange things and these really added another element of interest to the storyline.There are a number of weird goings on at the commune, strange sightings and your interest is continually raised trying to work out why these things are happening and if any of the rumours are true! I found myself constantly on edge as the darkness of the story increased and with an extremely chilling ending it just rounded off a wonderful but disturbing read!!