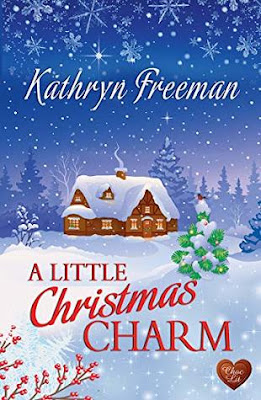 A wonderful new uplifting Christmas story from Kathryn Freeman to put you in the festive mood. Highly recommended
Would you swap sea and sunshine for tinsel and turkey? Gabby Sanderson is used to being let down – even at Christmas. Which is why she’s happy to skip the festive season completely in favour of a plane ticket and sunnier climes. But this Christmas could be different, because this time she might not be spending it alone. Can Owen Cooper charm Gabby into loving Christmas in the same way he’s charmed his way into her life, or is he just another person who’ll end up disappointing her?

Another sweet treat of a read from the wonderful Kathryn Freeman.

The story starts in the build up to Christmas and life at work has just picked up for Owen as he spots Gabby and he's smitten!  Is it wise to start a work relationship though? Gabby is just as smitten with the seemingly confident salesman, but she senses he's a flirty character and that is just the way he acts with everyone, so maybe she's reading too much into his glances and attention!

But as they begin to spend more time together, they both allow themselves to open up to one another and as their pasts have scarred them, it is no wonder that they both seem a little reluctant to jump right into a relationship. But they are both such endearing characters that you quickly warm to their ways and wish they'd both be brave and embrace their time together.

With Christmas fast approaching there's always going to be some extra drama to muddy the water and it's how they both deal with the problems facing them that tug at your heartstrings and make this such a satisfying story.  I just wish it could have gone on for longer as I loved spending time in their company! Fabulous!!