#bookreview The Widow by Fiona Barton 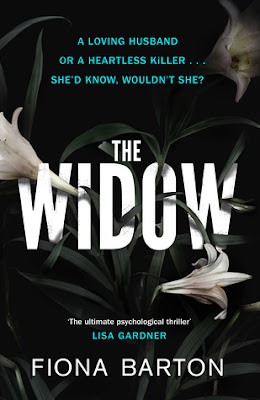 'The ultimate psychological thriller' Lisa GardnerWe've all seen him: the man - the monster - staring from the front page of every newspaper, accused of a terrible crime.But what about her: the woman who grips his arm on the courtroom stairs – the wife who stands by him?Jean Taylor’s life was blissfully ordinary. Nice house, nice husband. Glen was all she’d ever wanted: her Prince Charming. Until he became that man accused, that monster on the front page. Jean was married to a man everyone thought capable of unimaginable evil.But now Glen is dead and she’s alone for the first time, free to tell her story on her own terms.Jean Taylor is going to tell us what she knows.Du Maurier's REBECCA meets WE NEED TO TALK ABOUT KEVIN and GONE GIRL in this intimate tale of a terrible crime.'My book of the year so far' C. L. Taylor, author of THE LIE

This book has been my obsession for the past few days, as I listened to the audio version via Borrowbox. And it was so wonderful to hear it all brought to life so stunningly by the narrator - and I loved the bonus interview at the end too between her and the author which added so much more to the reading experience!This is the story of Jean Taylor, who has led a very quiet life until her husband Glen is accused of kidnapping a young child. Surely not her Glen? She stands by him as the press and police close the net convinced they have found their man. We then hear the story not only from Jean's point of view, but also from the perspective of a journalist wanting the exclusive story and the detective leading the investigation to find the missing girl. The timeline is from now when Jean is widowed and also goes back to the past when the media circus was camped outside her door from dawn to dusk.I had so many questions in my head as I read through this - how does somebody stand by someone accused of such horrific things? What lengths do the press go to in getting that exclusive aspect of a story? And how does a police force build up a case where there is very little evidence or witnesses? And the author has done an amazing job of exploring all these avenues throughout as she follows the story of the missing 2 year old. You are left with so many conflicting emotions as the story goes through a number of revelations that leave you shocked, upset, angry and most of all intrigued as to the outcome of the story.The journalist and the detectives sides to the story really added an extra dimension to the book - it was fascinating to see how the case consumed the detective and how he wouldn't settle until he'd looked at all aspects to those under suspicion. And with the journalist it was interesting to see how their minds worked in relation to getting different sides to a story.I found this to be such a gripping and fascinating story that I was sad when it came to an end. Looking forward to reading more from this author very soon!!