Delighted to be able to share an extract AND a giveaway with you today as part of this fabulous Blog Tour. My thanks to the author, publisher and Rachel of Rachel's Random Resources for letting me be part of it all! 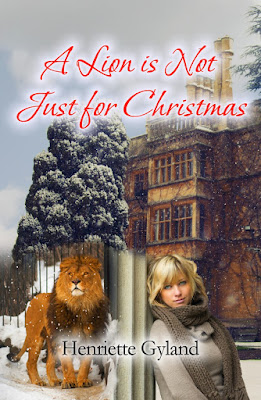 Is there life after the circus has left town?

Circus performer Justine Belmont works with big cats, but when the circus is disbanded and the old lion is sold to a private menagerie at a stately home in Norfolk, she is asked to spend a few weeks settling him into his new environment. When she arrives at the estate, however, she receives a mixed welcome.

The groundsman Tom Yates resents her presence as he doesn’t feel he needs her help with the lion. He revises his opinion when he sees the bond between her and the big cat, and she and Tom grow closer, although Justine remains torn about her feelings for him. The lady of the house, Priscilla - who is married to the reclusive owner, Lord Brooks’s, grandson - is not so easily convinced. She perceives Justine as a threat for the male attention and her plans for the manor. And her two young daughters are a little too curious about the lion for their own good.

When unsettling events occur, Justine begins to wonder if there is more to Priscilla’s animosity than meets the eye. Can Justine keep herself and everyone else safe until it’s time for her to leave again and start a new life elsewhere?

Henriette Gyland grew up in Northern Denmark but moved to England after she graduated from the University of Copenhagen. She wrote her first book when she was ten, a tale of two orphan sisters running away to Egypt, fortunately to be adopted by a perfect family they meet on the Orient Express. Between that first literary exploit and now, she has worked in the Danish civil service, for a travel agent, a consultancy company, in banking, hospital administration, and for a county court before setting herself up as a freelance translator and linguist. Henriette recently began to pursue her writing in earnest winning the New Talent Award in 2011 from the Festival of Romance and a Commended from the Yeovil Literary Prize. Henriette lives in London.

The following scene is during the last circus performance of the season. In the ring Justine is assisting her father, Elijah, in his lion-taming act.


Then, one by one, the animals were let into the ring through a tunnel cage.
‘Behold the terrifying Rexus, straight from the African sa-a-avannah!’ intoned the MC as the lion lumbered in and found his assigned pedestal to the far left, his home-away-from-home when out of his cage.

‘Regard the fearsome tiger duo, Ajit and Mohan, the man-eaters of Ca-a-alcutta!’
Never mind that Rexus was bred in captivity and the young tiger twins came from a circus in Australia … The illusion was everything.

Ajit found his pedestal with no trouble, but Mohan snarled and clawed at Elijah’s cane, his only defence against three large predators. There was a collective gasp from the audience, and a little girl at the front, who was here with her parents and grandfather by the looks of it, climbed onto her father’s lap and promptly stuck her thumb in her mouth. The deep auburn hair of the little girl’s father shone in the circus spotlight and caught Justine’s attention. When her eyes met his – such dark, stormy blue eyes – through the bars of the cage, she nearly missed her footing and had to force her focus back on the animals.

Never turn your back on the tigers.

Elijah’s first warning to Justine when she began assisting him rang out in her head. Male lions like Rexus were easier to tame because of their usually laidback nature, but tigers were more reserved and unpredictable.

She swallowed hard as her father coaxed Mohan on to his pedestal, using soothing words, a titbit of meat, and the command ‘Platz!’ After what seemed like an age Mohan complied and sat on his pedestal with a smug grin on his face.

The audience cheered with relief, not knowing that it had been one such unruly tiger which had made Justine’s mother Beth retire from the ring and take over catering instead. With a jagged scar on her arm to prove it.

When all three cats had settled, Elijah raised his cane and said, ‘Up!’ Rexus and the tigers sat up on their hind legs with their front paws in a begging pose and stayed on their hind legs for as long as Elijah held the cane in the air. When he lowered it again, the animals sat down.
A member of the ring passed three silver balls down the tunnel cage and Justine placed each of them in front of the animals.

‘Seat!’ Elijah raised and lowered his cane to command the tigers to climb onto the ball, and at the word ‘Up!’ they raised themselves onto their hind legs, balancing on the balls. He then commanded Rexus onto his ball. The old lion did so but with a little less confidence, then when Elijah circled his finger in the air, the lion rolled the ball in a straight line to the edge of the cage grunting discontentedly, where he stopped, faltered a little when turning around, then back to his pedestal. ‘Platz!’ got him seated again.

The Irish audience responded with a roar of applause. They were every bit as appreciative as English audiences had been, more so perhaps. It made Justine’s longing for her native country bearable as she still missed touring in England.

*Terms and Conditions –UK entries welcome. Please enter using the Rafflecopter box below. The winner will be selected at random via Rafflecopter from all valid entries and will be notified by Twitter and/or email. If no response is received within 7 days then I reserve the right to select an alternative winner. Open to all entrants aged 18 or over. Any personal data given as part of the competition entry is used for this purpose only and will not be shared with third parties, with the exception of the winners’ information. This will passed to the giveaway organiser and used only for fulfilment of the prize, after which time I will delete the data. I am not responsible for despatch or delivery of the prize.