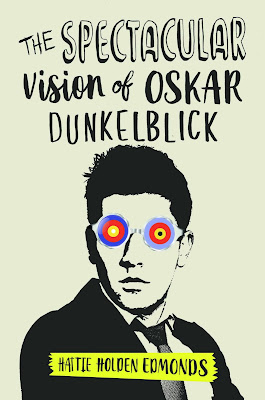 My thanks to Anna and the team at RedDoor for inviting me to take part in this tour and to share my thoughts on the enigma that is Oskar Dunkelblick!!

Lemony Snicket meets His Dark Materials in this unforgettable YA crossover novel
Oskar is the ultimate teenage loner. He’s been living on the streets since he was a kid, he hates being touched and his eyes are always itchy from chronic conjunctivitis. To perk himself up, he paints the misery of mankind. After all, there’s so much of that about . . .
One day during a not-so-routine eye test, Oskar’s bleak perspective is blown apart when he tries on a pair of very unusual lenses. The world he glimpses is filled with love, light and wonder – and he is furious. But those lenses have opened his inner eye and much against his darker nature, Oskar’s perception and behaviour begin to change in ways that he could never, ever have imagined.
Publication Date - 8th November 2018

I do love a quirky character in the books I read, and you'll have to go a long way to find one as quirky as Oskar!  He's described as a teenage misery merchant! He seems to revel in the misfortune of others, and uses that for inspiration for his artwork!  So you'll find yourself having very little sympathy for him as he makes his way to the village of KeineFreude, a grim little village full of people who seem to hate themselves and each other! But to Oskar this sounds like heaven! A perfect hotbed of bitter and twisted humans for him to exploit.  His motto 'Compassion is for losers' has stuck with him for many years

As you read more about Oskar and how he has treated  various people over the years, you do wonder why he has so much hate in his heart, but little glimpses into childhood reveal a lot and put things a little into perspective.  Some things he does though are very difficult to forgive!

As he settles into life in the new village he finds his outlook on life begins to shift after a visit to a strange little optician shop, and soon finds he's beginning to hate who he is becoming! He's seeing good in the world for the first time and finds himself doing nice things for others - totally against everything he has ever known!! But what is it about those glasses that have changed him?! And just why are so many villagers so  miserable?!  Maybe there's more to meets the eye behind some of the villagers and maybe Oskar can finally play the hero instead of the villain!

I found this to be such a fun and dark read!  There were a number of quirky characters and the message behind the story was quite perceptive and relevant to the times we live in now.  I had so many mixed emotions about Oskar and his behaviour but found myself warming to him - and his Nesquik addiction! - as the story unfolded.  This is aimed at the YA market but can also be enjoyed by readers of all ages as it does teach you about how having a different outlook can change you as a person. 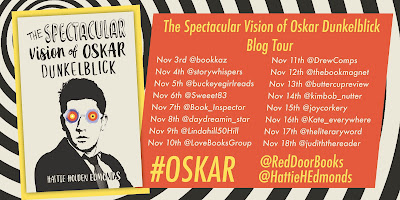