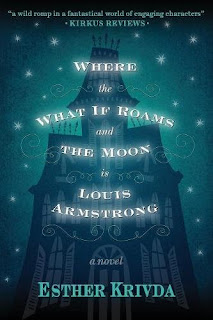 Extremely delighted to be hosting the stop today on this fantastical Blog Tour! My thanks to the Author and Anne of  Random Things Tours for giving me the opportunity to be part of it all!

“Esther Krivda’s debut novel, Where the What If Roams and the Moon Is Louis Armstrong, is a special kind of book, the kind of book that warrants many readings and a future CliffsNotes edition. It is a long, heady emporium of a book. Krivda herself describes it as a modern psychological fairy tale. Indeed, there are fairies in this book. But her own description almost belies, or at least oversimplifies, the ambitious nature of this marvelous and virtuosic work. This is the kind of book that scares off publishers, intimidates readers, and announces a major literary talent. …” —★★★★★FIVE STAR CLARION REVIEW

Sophia Oomla leaves the talking world. When her teacher calls on her. When her classmates speak to her. But at midnight, when no one can hear her, no one can see her, she finds her tongue. In fact, she is the Star-of-the-Talking-World, and a vamp, too, who can strut and hold forth and thunder away in her very own clandestine Midnight Movie Star School. For Sophia Oomla only wants to talk in the Talking-World the way Movie Stars do, the way her Mother does. Because surely they are from the Land-of-the-Perfect, and not from the land that she comes from, the Land-of-the-Timid-Tongues. Because wordless-ducklings from that land get sentenced to see speech therapists for non-communication, like she’s been.Eloquent in one place, but not another?Do you smell a paradox, Readers?The magical creatures sure did. They lived in our protagonist’s head and know all about minds and thinking, except why this girl could be so very confident in one place and so very faltering in another. Those creatures needed someone who not only understood the problem but who would write a book about it. Which lead their noses right smack to me, another falterer and a writer besides. Those sniffer-extraordinaires must've sniffed my own about-faces - like when my inside-me is dying to write but my outside-me can't type a word. So those tricksters drafted me to narrate Sophia's story. But those imps weren't finished; they knew that paradoxes were running amok in her parents', the Oomlas, minds as well and they insist I tell their story, too.'Where the What If Roams and the Moon Is Louis Armstrong' wonders why somebody is one way on the outside, but inside, something else entirely. Can the Oomlas, can I, can we, live with our paradoxes? Or will each of us collapse like a house divided? And it wonders, too, about those nagging voices within, some of whom, in this story, take the form of magical creatures who wouldn’t leave the Oomlas alone (or me, either). Just who are those voices? Who is that interrupting us, haunting us, stopping us from going on our merry way? Who really is inside us calling our shots? Our parents, the universe? Where do they end and our true selves begin? And how can we be who we really are if there are so many others inside us? And just who exactly is that pest inside Sophia who keeps comparing her voice to her Mother’s? And who is that nagging voice within me that wouldn't let this writer write? Will Sophia ever stop believing it? Will I? 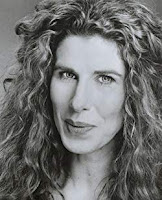 Esther Krivda has acted; studied ballet; worked as an admin in the movie studios in LA and in a talent agency in NYC; and loves to sing and draw faces. But she didn't discover writing til she took a course in Stop Motion Animation and soon found out her movie would need a script. And that’s when she got the idea of a little girl who cries out but only the man-in-themoon hears her. She never turned the idea into a Stop Motion Animation movie but she did turn it into this novel, her first.

Where to even begin?!!  This is no ordinary story and very difficult to review - in a good way! There's just so much going on that it's impossible to put it all into words! It's a huge beast of a book (over 650 pages!) and a little daunting when I first got my hands on a copy! BUT don't be scared!! Once you open up the pages and enter the world of Sophia you will soon fall under the spell and find yourself whisked away to a world of escapism, imagination and just a wonderfully fantastical place to be!

Sophia is the true star of this book.  She's the daughter of 2 very successful parents, and feels a little forgotten.  She finds that nobody really wants to listen to her true voice and only really shows herself at the 'movie star school' she sets up at home late at night.  She is smiten by old movies and the glamour, and it becomes her life and passion - falling asleep at school in class becomes a thing, and the response of those around her?!  She needs a speech therapist.  To her parents there's always a practical fix to problems that come their way when it comes to Sophia - throw money at a problem and it can be solved....

Sophia isn't totally alone though - she has 5 fairies living inside her head... yes you read that right! And they are there to 'guide' her, while also causing trouble and creating their own merry havoc!  I told you this book was unique!! The way of storytelling does take a while for you to come to terms with, but it works! We get the story with interruptions from both the narrator and the fairies which adds a great sense of humour and fun and really helps to portray those 'voices' that we all have in our heads either cheering us on or holding us back!  They are full of wisdom and can see the real Sophia and try and get the rest of the world to see her too.

I am really struggling to put into words how this book made me feel - it's one of those stories that needs to be experienced! It's mad, imaginative, magical, endearing, touching, fantastical and just plain bonkers! While you are reading it takes you out of yourself - just what books are there to do!  It's not one of those you can pick up and read in one sitting!  I read it in stages of about 50-100 pages a day, and found this a great way to really enjoy my time with the characters and let me reflect on what I'd read before diving in again for the next crazy part of the journey!

It's quite a pertinent story for the times we live in - everyone has busy lives and it is easy to miss what is happening just under our noses, and spend time concentrating on the wrong things. There are so many important messages that come through over the storyline, from taking time to appreciate the little things, teaching children to be themselves and really shows just how powerful fairy tales are in helping children deal with the world around them.

This is a book to be enjoyed by those of all ages - not the very young though! - and I will never look at the moon the same way again!! 😉 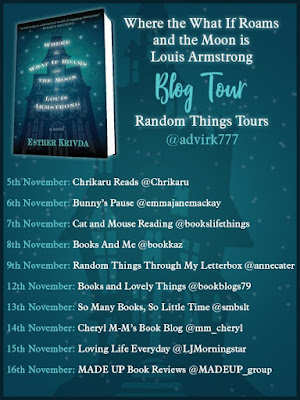 Email ThisBlogThis!Share to TwitterShare to FacebookShare to Pinterest
Labels: Blog Tour, Book Blogger, Book Review, Esther Krvida, Fiction, Magical, November 2018, Where the What If Roams and the Moon is Louis Armstrong, ya