#BookReview The Coming of the Spirits by Rob Keeley 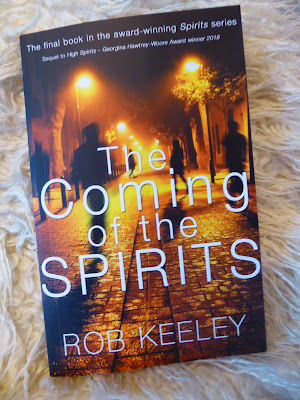 The final book in the award-winning Spirits series. Sequel to High Spirits – Georgina Hawtrey-Woore Award winner 2018. Rob Keeley is back with the fifth and final instalment in his award-winning Spirits series. The series allows young people to learn more about other times, as well as the time in which they live.“Nazis alone were dangerous enough, but Nazis with the powers of ghosts... of evil spirits...” Britain. The present day. The world we know. Ruled by the Nazis. Victorian England. Edward Fitzberranger is soon to become ill and die. But could there be another way? The Middle Ages. Sir Francis Fitzberranger is about to marry... but finds himself shifted in time. The barrier into the spirit world is finally breaking down and no one in the mortal world is safe. History must be set back on course and prophecies fulfilled. The Grand Defender is needed. As Ellie works with an underground resistance movement and with the spirit world too, she is about to discover her true destiny...

The boundary of the spirit world is broken - and what a way to finish this fun and educational supernatural series!The action in The Coming of the Spirits is fast paced and full of intrigue as Ellie prepares to right the wrongs of history being changed by her previous encounters with times gone by! And she gets to meet up with old friends as well as make new allies as she faces up to some troubling times.I came to this series late but have enjoyed every step along the way as the author has mixed great storytelling with learning about various times in history so well. You end up becoming fully invested in the character of Ellie as she faces challenging decisions, and I have to admit that I may have even shed a tear with certain events in this book! I loved the mix of jumping back to various timelines, with Ellie dealing with her own personal issues with her family and the scary prospect of aging 2 years every night!! Time definitely does fly in this book!There's so much for children to learn and take from this series in general, and it's a perfect book for parents to enjoy with them as The Coming of the Spirits is full of pulsating action and touches of humour to lighten some serious issues and developments. I've thoroughly enjoyed spending time with Ellie, her family and all the characters that became her friends over the years!
My thanks to the author and publisher for sending a copy of the book my way in return for a fair and honest review.