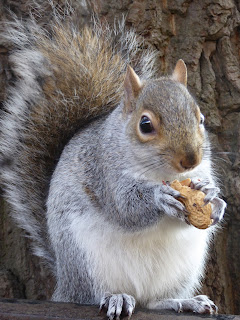 Hello fellow book squirrels!!  I hope you are well!  Struggling to shake off a cold here and seem to be eating a ridiculous amount of comfort food in the hope that it will help me.....I cling to the hope that one day chocolate will cure everything!! 🐷

I hope your bookish weeks have been productive! Pretty happy with mine - there has been 4 books finished, a little visit to NetGalley, some bookish purchases and some lovely Blog Tour Bookpost so I hope you enjoy this little look back at my week!

Read, and  listened, to some extraordinary books this week! It's not making choosing my favourite books of the year any easier....

The Museum of Modern Love by Heather Rose - 5 stars
Listened to the audio version of this on the BorrowBox app from my library - stunning! 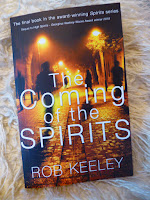 Flames by Robbie Arnott  - 5 stars
A stunning and mesmerizing read!

The Lonely City by Olivia Laing  - 4 stars
Fascinating non fiction book about the lonely world we find ourselves living in.

Netgalley is proving very difficult to stay away from at the moment..... 3 newbies to the shelves for me!

For fans of Ruth Ware and Tana French, a shivery, atmospheric, page-turning novel of psychological suspense in the tradition of Agatha Christie, in which a group of old college friends are snowed in at a hunting lodge . . . and murder and mayhem ensue.

All of them are friends. One of them is a killer.

During the languid days of the Christmas break, a group of thirtysomething friends from Oxford meet to welcome in the New Year together, a tradition they began as students ten years ago. For this vacation, they’ve chosen an idyllic and isolated estate in the Scottish Highlands—the perfect place to get away and unwind by themselves.

They arrive on December 30th, just before a historic blizzard seals the lodge off from the outside world.

Two days later, on New Year’s Day, one of them is dead.

The trip began innocently enough: admiring the stunning if foreboding scenery, champagne in front of a crackling fire, and reminiscences about the past. But after a decade, the weight of secret resentments has grown too heavy for the group’s tenuous nostalgia to bear. Amid the boisterous revelry of New Year’s Eve, the cord holding them together snaps.

Keep your friends close, the old adage goes. But just how close is too close?

When Frankie stumbles upon an unopened letter from her late mother, she’s delighted to have one last message from her . . . until she reads the contents and discovers the truth about her birth. Brimming with questions, she travels to York to seek further answers from the Mortimer family, but her appearance sends shockwaves through them all.Meanwhile, Robyn Mortimer has problems of her own. Her husband John has become distant, and a chance remark from a friend leads Robyn to wonder exactly what he’s not been saying. Dare she find out more?As for Bunny, she fell head over heels in love with Dave Mortimer when she first arrived in town, but now it seems her past is catching up with her. She can’t help wondering if he’ll still feel the same way about her if he discovers who she really is – and what she did.As secrets tumble out and loyalties are tested, the Mortimers have to face up to some difficult decisions. With love, betrayal and dramatic revelations in the mix, this is one summer they’ll never forget.

A woman; a war; a child that changed everything. Spanning the sweep of the twentieth century, We Must Be Brave is a luminous and profoundly moving novel about the people we rescue and the ways in which they rescue us back."She was fast asleep on the back seat of the bus. Curled up, thumb in mouth. Four, maybe five years old.

I turned around. The last few passengers were shuffling away from me down the aisle to the doors. 'Whose is this child?’ I called.

Nobody looked back."December, 1940. As German bombs fall on Southampton, the city’s residents flee to the surrounding villages. In Upton village, amid the chaos, newly-married Ellen Parr finds a girl sleeping, unclaimed at the back of an empty bus. Little Pamela, it seems, is entirely alone.Ellen has always believed she does not want children, but when she takes Pamela into her home the child cracks open the past Ellen thought she had escaped and the future she and her husband Selwyn had dreamed for themselves. As the war rages on, love grows where it was least expected, surprising them all. But with the end of the fighting comes the realization that Pamela was never theirs to keep 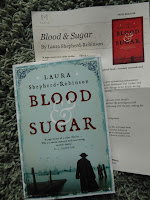 Blood & Sugar is the thrilling debut historical crime novel from Laura Shepherd-Robinson.June, 1781. An unidentified body hangs upon a hook at Deptford Dock – horribly tortured and branded with a slaver’s mark.Some days later, Captain Harry Corsham – a war hero embarking upon a promising parliamentary career – is visited by the sister of an old friend. Her brother, passionate abolitionist Tad Archer, had been about to expose a secret that he believed could cause irreparable damage to the British slaving industry. He’d said people were trying to kill him, and now he is missing . . .To discover what happened to Tad, Harry is forced to pick up the threads of his friend's investigation, delving into the heart of the conspiracy Tad had unearthed. His investigation will threaten his political prospects, his family’s happiness, and force a reckoning with his past, risking the revelation of secrets that have the power to destroy him.And that is only if he can survive the mortal dangers awaiting him in Deptford...

The Lights of Time by Paul Ian Cross

Would you sacrifice your future to save your past? Engella Rhys is alone, adrift and on the run. Pursued by a secret agency, known only as the Hunters, she must stay ahead to stay alive. As she travels through space-time using dangerously experimental technology, she only has one wish: to be reunited with her lost parents. After a close shave with a Hunter on the streets of New Shanghai, Engella escapes to find herself on a deserted beach. When she meets a kind stranger, who offers her food and shelter, Engella feels safe and protected for the first time in years. But who is this woman? And why did their paths cross at the most convenient of times? Engella soon discovers their lives are intertwined in more ways than she could ever imagine.

The latest Book of the Month from the wonderful Goldsboro Books is The Chestnut Man by Soren Sveistrup! 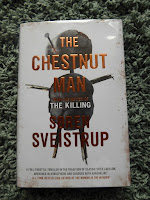 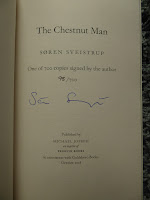 The police make a terrible discovery in a suburb of Copenhagen. A young woman has been killed and dumped at a playground. One of her hands has been cut off, and above her hangs a small doll made of chestnuts.
Young detective Naia Thulin is assigned the case. Her partner is Mark Hess, a burned-out investigator who's just been kicked out of Europol's headquarters in The Hague. They soon discover a mysterious piece of evidence on the chestnut man - evidence connecting it to a girl who went missing a year earlier and is presumed dead, the daughter of politician Rosa Hartung. A man confessed to her murder, and the case is long since solved.
Soon afterwards, another woman is found murdered, along with another chestnut man. Thulin and Hess suspect that there's a connection between the Hartung case, the murdered women and a killer who is spreading fear throughout the country. But what is it?
Thulin and Hess are racing against the clock, because it's clear that the murderer is on a mission that is far from over . . .


TINMAN by Sarah Winman
Found this in a charity shop and have heard nothing but good things so I HAD to get it!

This is almost a love story.Ellis and Michael are twelve when they first become friends, and for a long time it is just the two of them, cycling the streets of Oxford, teaching themselves how to swim, discovering poetry, and dodging the fists of an overbearing father. And then one day this closest of friendships grows into something more.But then we fast forward a decade or so, to find that Ellis is married to Annie, and Michael is nowhere in sight. Which leads to the question, what happened in the years between?This is almost a love story. But it's not as simple as that.

A Book of Silence by Sara Maitland - nonfiction November

I hope you've been well behaved on the book front this week?!  Read any of these? Or have I tempted you to try any out?! Hope so!