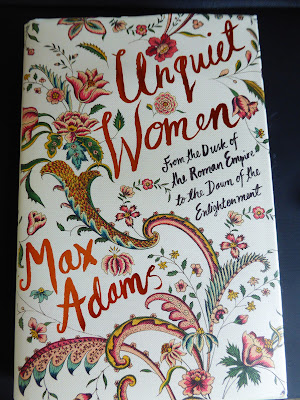 Wynflæd was an Anglo-Saxon noblewoman who owned male slaves and badger-skin gowns; Egeria a Gaulish nun who toured the Holy Land as the Roman Empire was collapsing; Gudfrid an Icelandic explorer and the first woman to give birth to a European child on American soil; Mary Astell a philosopher who out-thought John Locke.
In this exploration of some remarkable – but little-known – women living between between the last days of Rome and the Enlightenment, Max Adams overturns the idea that women of this period were either queens, nuns or invisible. In a sequence of chronological chapters, a centrepiece biographical sketch is complemented by thematically linked stories of other women of the time. A multi-faceted and beautifully illustrated study of women's intellect, influence and creativity, Unquiet Womenbrings to life the experiences of women whose voices are barely heard and whose stories are rarely told.

I found this to be a thoroughly captivating look at some of the forgotten women of history, throughout the ages.

The achievements of many were only really appreciated long after their deaths, and this book does a wonderful job of bringing their names and contributions back to life and to a wider audience.

When I read books like this it makes me mad that I never really appreciated history when I was back at school! I think all I can remember being taught about was about The Tudors, so to read these stories of such remarkable women from around the world, and from wide backgrounds had me enthralled and interested in searching out more about these women. So much has been learnt about them from archeological digs and that was another fascinating aspect of these stories. How important discoveries had been made over the years and how many interesting items had been buried alongside seemingly normal women, but through these objects it was made clear that they were highly respected at the time of their deaths.

There is a great range of subjects discussed, from impacts that women had on certain periods in time, the battles and barriers they faced while they were alive and how their determination saw them achieve their aims - even if it was only appreciated at much later times!

Highly recommend this as a wonderful read for women, and men!, of all ages - and the stunning cover just adds to the enjoyment!