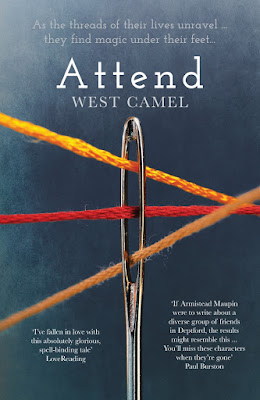 A highly anticipated debut, blending the magical realism of Angela Carter and the gritty authenticity of Eastenders

Extremely delighted to be the latest stop on this fabulous Blog Tour! My thanks to the Author, Publisher and Anne of  Random Things Tours for allowing me to be part of it all!

When Sam falls in love with Deptford thug Derek, and Anne’s best friend Kathleen takes her own life, they discover they are linked not just by a world of drugs and revenge; they also share the friendship of the uncanny and enigmatic Deborah. Seamstress, sailor, story-teller and self-proclaimed centenarian immortal, Deborah slowly reveals to Anne and Sam her improbable, fantastical life, a history of hidden Deptford and ultimately the solution to their crises. With echoes of Armistead Maupin, Attend is a beautifully written, darkly funny, mesmerisingly emotive and deliciously told debut novel, rich in finely wrought characters and set against the unmistakable backdrop of Deptford and South London. 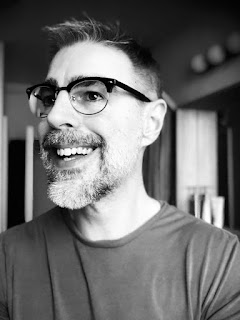 Born and bred in south London – and not the Somerset village with which he shares a name – West Camel worked as an editor in higher education and business before turning his attention to the arts and publishing. He has worked as a book and arts journalist, and was editor at Dalkey Archive Press, where he edited the Best European Fiction 2015 anthology, before moving to new press Orenda Books just after its launch. He currently combines his work as editor at Orenda Books with writing and editing a wide range of material for various arts organisations, including ghostwriting a New-Adult novel and editing The Riveter magazine for the European Literature Network. He has also written several short scripts, which have been produced in London’s fringe theatres, A highly anticipated debut, blending the magical realism of Angela Carter and the gritty authenticity of Eastenders and was longlisted for the Old Vic’s 12 playwrights project. Attend is his first novel.

I think the best way to sum this story up is that it's a story of lost souls.  And a thoroughly unique tale that is very difficult to pinpoint a genre for.  It's a little bit of everything! And it works! You get totally caught up in the lives of these characters - especially Anne and Sam - that makes you think of them long after you've finished reading and it takes a special way of writing to achieve that.

It has very dark themes which add to the realism of their stories - their lives haven't been easy and they find themselves in tough times but in the character of Dorothy they seem to find someone to share all their thoughts and fears with, while she has her own fascinating story to share.  She seems to put more into life than she gets out with her comments on feeling like so many don't see her and her connection with Anne and Sam is particularly touching.

It deals with many issues that are rife nowadays - complicated families, drug issues, relationship problems and dealing with those demons that can take over your head and approaches all these subjects with such clarity and sensitivity.

It's a book that evokes many emotions from anger to sadness as you read, but definitely a story and characters that you won't forget. 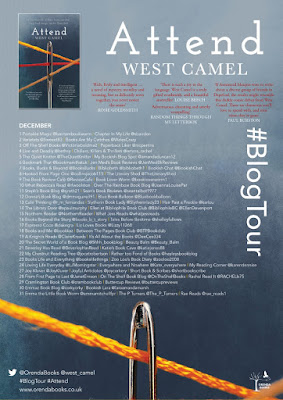