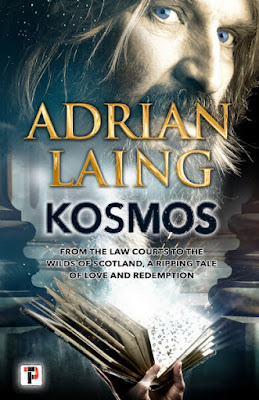 Extremely delighted to be the latest stop on the Blog Tour for KOSMOS by ADRIAN LAING.  My thanks to the author, publisher and Anne of Random Things Tours for letting me be part of it all!

If you are looking for something a little different to read, then look no further!

Rookie barrister George Winsome, young and arrogant, defends an old boy who thinks he’s Merlin on a manslaughter charge. The riotous trial turns Merlin into a celebrity; money, greed and ambition take hold of George and his partner Heather until the secret of Merlin’s past is revealed as the spirit of Saint Yves intervenes to ensure George and Heather follow their true paths. ‘Kosmos’ is a modern-day jury trial, a feel-good love story and a spiritual journey involving Saint Yves, Nemesis and Merlin.

FLAME TREE PRESS is the new fiction imprint of Flame Tree Publishing. Launching in 2018 the list brings together brilliant new authors and the more established; the award winners, and exciting, original voices. 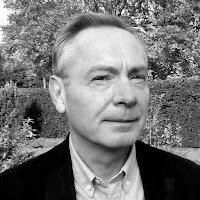 Adrian Laing was born in Harlow, Essex in 1958 and was educated at Hillhead High School, Glasgow and Exeter University where he studied law, graduating in 1978. Adrian was called to the bar (Inner Temple) in 1979, aged 21. Following a sabbatical in Paris studying with Michel Foucault at the College de France, Adrian undertook a pupillage in chambers and was made a Tenant (2 Pump Court, Inner Temple) practicing at the criminal bar defending and prosecuting in jury trials for seven years.

Leaving the criminal bar in 1987 to pursue more commercial interests, Adrian worked as the Assistant Head of Licensing at the ITC during the Channel 3 franchise process and then as a full-time consultant to the Chief Executive of Thames Television (Richard Dunn), following which Adrian was appointed the Senior Broadcasting Lawyer for the Leeds-based firm of solicitors, Hammond Suddards working in the city of London.

In 1994 Adrian was selected to become the first in-house lawyer at the Murdoch-owned publishing house, HarperCollins, where he held the position of Director of Legal Affairs and Company Secretary till 2001 working with some of the leading authors and agents of the day.

Adrian qualified as a solicitor in 2003 and set up his own legal practice (Laing & Co) for over 10 years acting for a wide range of prestigious business clients and authors. Adrian presented or chaired a leading seminar for The London Book Fair 2003 to 2012.

Adrian Laing is the co-author with his wife (Deborah Fosbrook) of three leading law titles published by Bloomsbury Professional, the author of R.D. Laing: A Life a widely acclaimed biography of his late father, the Scottish psychiatrist R.D. Laing, and a novel, Rehab Blues.

Adrian has appeared on radio and television many times most notably the BBC documentary ‘Just Another Sinner’ and Saturday Live with James Runchie.

Reading this was a pleasant surprise and turned out to be nothing like I thought it was going to be!  It's a blend of a courtroom drama, with an insightful and poignant story of finding your way in life and doing what makes you happy - it isn't always about the money!

Add to the mix a man who says he's Merlin - yes, THE Merlin! - and you find yourself totally involved with the fight for justice and watching how people can be transformed by those they meet along the way.

George Winsome - what a name for a lawyer! - is a barrister in training and finds himself thrown in the deep end for his first case! He has to learn the tricks of the trade as he goes and the pressure is on for him to win the case as there are expectations from his firm.  His client, Merlin, is accused of manslaughter but is seemingly winning over the hearts and minds of those he meets in jail - prisoners and staff! -  and the case soon  grabs the attention of the media! The case itself turns even crazier too especially when the Jury seem more interested in what food is on offer, and the Judge is dealing with a son who seeks revenge in a rather peculiar  way!

I really enjoyed the character of Merlin as he was just so pleasant and wise!  He's often puzzled by the world he finds himself in and it was good to see modern life through his eyes.   He forms a great bond with George and that really helps in the second part of the book where he is there seemingly to guide George and his girlfriend Heather as they face some tougher times in their lives and they try to work out the point of it all!

So if you're looking for a book that has a bit of fantasy, touches of humour and a strong courtroom drama element, then this is the book for you!  A really enjoyable read!! 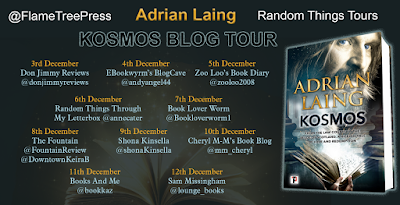