#BlogTour The Other Miss Bates by Allie Cresswell #BookExtract @rararesources

Hugely delighted to be the latest stop on the Blog Tour for THE OTHER MISS BATES by ALLIE CRESSWELL.  My thanks to the author, publisher and Rachel of Rachel's Random Resources for letting me be part of it all!

I'll be sharing an extract with you today to help give you a little taster of the book, and hopefully tempt you into adding it to your TBR pile! One more won't hurt!! 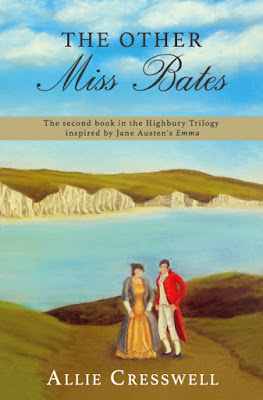 Jane Bates has left Highbury to become the companion of the invalid widow Mrs Sealy in Brighton. Life in the new, fashionable seaside resort is exciting indeed. A wide circle of interesting acquaintance and a rich tapestry of new experiences - balls at the Assembly rooms, carriage rides and promenades on the Steyne - make her new life all Jane had hoped for.

While Jane’s sister Hetty can be a tiresome conversationalist she proves to be a surprisingly good correspondent and Jane is kept minutely up-to-date with developments in Highbury, particularly the tragic news from Donwell Abbey.
When handsome Lieutenant Weston returns to Brighton Jane expects their attachment to pick up where it left off in Highbury the previous Christmas, but the determined Miss Louisa Churchill, newly arrived with her brother and sister-in-law from Enscombe in Yorkshire, seems to have a different plan in mind.

Allie Cresswell was born in Stockport, UK and began writing fiction as soon as she could hold a pencil.
She did a BA in English Literature at Birmingham University and an MA at Queen Mary College, London.
She has been a print-buyer, a pub landlady, a book-keeper, run a B & B and a group of boutique holiday cottages. Nowadays Allie writes full time having retired from teaching literature to lifelong learners.
She has two grown-up children, two granddaughters, two grandsons and two cockapoos but just one husband - Tim. They live in Cumbria, NW England.
The Other Miss Bates is her eighth novel and the second in the Highbury series

All we know of Jane Bates from Emma is that she married a man by the name of Fairfax, their marriage lasting only long enough to produce a daughter, Jane. I wanted this tragically short relationship to be happy. Having made Jane a young lady of intelligence and courage, and given that her first choice of husband, Captain Weston, would be denied her by canon, I wanted to provide her with a husband who would nurture and fulfill all her excellent qualities and ambitions. Thus I conceived Angus Fairfax. But nothing shows up a person’s merits quite like comparing them with their polar opposite, so I came up with Arthur Sealy as an arch villain and rival for Jane’s affection.
Here, she meets both for the first time out in Brighton with her patroness Mrs Sealy, an invalid widow.

‘Good day, Arthur. I was not aware you were in town.’

Mrs Sealy addressed an extremely tall, very broad-shouldered young man with a heavy brow beneath a beetling cliff of forehead and a thick mop of unruly hair. His frock-coat was finely cut, his stock tied very tight and high, a froth of lace fell from his cuff. Altogether he cut a handsome – even brilliant – figure but it was a brutal, rather frightening beauty. Jane did not think she had ever seen such a toweringly large man; his physical presence was quite oppressive – he threw their table into shadow – and the expression on his face by no means denoted a benign character. His face was hard, his eye proud and cold. Since Mrs Sealy did not offer her hand he lifted it from her lap and bowed over it, placing a kiss on a particularly large and brilliant stone on her finger. ‘I wished to surprise you, Mama. I hope you are pleasantly surprised.’

‘I am astonished, indeed,’ said Mrs Sealy, retrieving her hand. ‘I thought it understood between us that you would be on the continent for many months.’
‘It was my fixed intention to remain abroad, but it cannot be done without funds. Who is this charming young lady, Mama? Won’t you introduce me?’
‘This is my companion, Miss Bates,’ Mrs Sealy said reluctantly. ‘Miss Bates, this is the Admiral’s son by his first wife, Arthur Sealy.’
‘Good day to you Miss Bates,’ said Arthur Sealy with a predatory smile, ‘I am charmed to make your acquaintance. Do you attend the Assembly this evening? I would be honoured to engage you for the first dances.’
‘Miss Bates does not dance,’ Mrs Sealy said quickly.
‘She certainly ought to, then,’ Mr Sealy drawled, ‘she should not deprive a fellow of such a partner. I overheard you telling that gentleman that you are going to the Rookery. I think I will join you. It is a delightful afternoon for a stroll in the gardens is it not Mama? Oh, but I forget,’ with a cruel, mirthless laugh, ‘you can not stroll.’
‘I am afraid that won’t be possible,’ Mrs Sealy replied. ‘We are going as guests…’
‘Of Captain Bates. Yes, I heard. An excellent man and an old acquaintance. He will not mind my joining you.’
‘I will mind,’ Mrs Sealy said, ‘we have particular family reasons for meeting Captain Bates this afternoon and your presence would frustrate them. Arthur I pray you would leave us now. If you wish to call in the morning you may do so.’
‘Family reasons?’ Mr Sealy cried. ‘Since I am family I can think of no better reason for me to do myself the pleasure of joining your party. It will be a duty, indeed, if ‘family’ is at the crux of it. What do you plan to do behind my back, I wonder?’

Mrs Sealy summoned patience from a cache which was all-but dry. ‘Not our family, Arthur. Miss Bates’ family. You could make no contribution whatsoever.’
‘I think I will be the judge of that, Mama,’ the young man said with an unpleasant smirk. ‘Come, let me carry you to your carriage.’ He bent and made as though to scoop the defenceless Mrs Sealy up in his arms.

Jane leapt from her chair, gasping at the man’s audacity. She reached out, fully ready to fight for possession of Mrs Sealy if necessary, quite determined that he would not touch her, much less lift her from her seat. ‘Sir, I pray you will step away,’ she said. ‘You impose yourself.’

‘Gentlemen,’ said a soft-voiced man whom no one had remarked before but who had been hovering on the terrace for some moments awaiting an opportunity to approach Mrs Sealy’s table. He had red hair, a thin but perfectly proportioned face and wore wire spectacles. He was tall but slender, dwarfed by the bulk of Arthur Sealy. ‘The cricket match is to begin presently,’ he remarked mildly. ‘See how the spectators are gathering?’ He threw his arm out to indicate an assemblage of the great and the good of Brighton strolling quite within sight and probably within earshot of the fracas which had been about to occur on the terrace. ‘There is the Duke of Cumberland and Mr Pelham. Is that Lord Montesquieu? I can’t quite make out… My eyes, you know, are not keen… Can you see?’
Almost imperceptibly the man edged Arthur Sealy away from his step-mother and Miss Bates. Under guise of interesting him in the august company gathering to watch the cricket he also no doubt brought forcefully to the young man’s mind that a display of fisticuffs with such an audience would sink his reputation so low it would probably be beyond retrieval. With Mr Sealy’s attention distracted Mrs Sealy had herself quickly conveyed to her carriage. Jane gathered her mistress’ things and soon followed. They were almost ready to depart when the red-haired stranger stepped up.

‘You must do me the honour of knowing your name, sir. You have performed a heroic service,’ Mrs Sealy cried, grasping his hand. Her voice, full of gratitude, also betrayed that tears were near. She had been badly shaken by the encounter with Arthur Sealy.
‘It was nothing at all,’ he said, ‘I felt compelled to intervene.’ He looked at Jane. His eyes, behind their glass lenses, were intensely blue. He gave her a penetrating, searching look. ‘Such courage,’ he said. ‘Let me commend you, ma’am. You would have taken him on single handed. I doubt you needed me at all.’

Mrs Sealy’s coachman had taken up the reigns. The horses were restless, ready to be off.
‘Your name, sir?’ Mrs Sealy repeated.
‘Oh,’ said the young man, stepping down from the carriage. ‘I am Angus Fairfax.’

Please check out the other stops on the Blog Tour and I hoped you've enjoyed the extract today as much as I have! 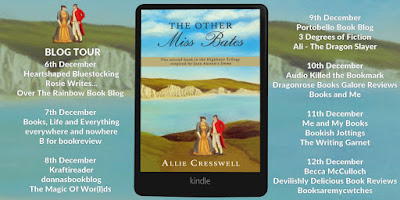