#BookReview Moonlight on the Thames by Lauren Westwood 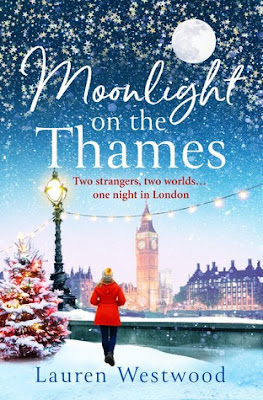 Worlds collide when two strangers meet at Waterloo station. It's a moment they'll never forget. Perfect for the fans of Milly Johnson.
Christmas is a joyous time, but not everyone is merry and bright.

Nicola is a rising star at the top of the corporate ladder, but her personal life is a disaster. Her office affair has lost its allure, and the last thing she wants to think about is Christmas. A night of cancelled trains and festive Christmas carols at Waterloo Station is just about the last straw...
Dmitri loves conducting his pop-up choir during the festive season, meeting people, and spreading joy and cheer around London. But he carries deep secrets from his past that robbed him of his dream to become a concert pianist.
Can their hearts and souls be unlocked by music and moonlight and will they discover the healing power of love?

I really enjoyed this story that features 2 characters who aren't perfect but tragedies in their past explain their insecurities and reluctance to trust people. And they both deal with their pasts in different ways - Nicola is all about work, creating an image that her successful lifestyle fulfills her, whilst having very little belief in herself as she's treated appallingly by the married man she's had an affair with for 3 years. And Dimitri throws himself into working with the choir and charity work - putting others before his own happiness at times, despite his sister supporting him to start thinking of himself for a change.When a chance meeting brings these two characters together, the sparks fly almost instantly but they are so down on themselves as people that they take a while to admit their true feelings and find the happiness they both deserve.I loved how relatable both characters are in this book and once they'd thrown off their pasts and woke up to their often destructive behaviour, it really brought them out of themselves and let them follow their dreams!It's not all a light and fluffy read as some of the things they'd been through are discussed but it still made for a engrossing read and I look forward to reading more from this author in the past.