#BookReview The Narrow Road to the Deep North by Richard Flanagan 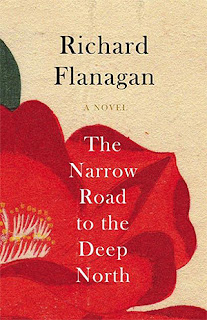 A novel of the cruelty of war, and tenuousness of life and the impossibility of love.Richard Flanagan's story — of Dorrigo Evans, an Australian doctor haunted by a love affair with his uncle's wife — journeys from the caves of Tasmanian trappers in the early twentieth century to a crumbling pre-war beachside hotel, from a Thai jungle prison to a Japanese snow festival, from the Changi gallows to a chance meeting of lovers on the Sydney Harbour Bridge.Taking its title from 17th-century haiku poet Basho's travel journal, The Narrow Road To The Deep North is about the impossibility of love. At its heart is one day in a Japanese slave labour camp in August 1943. As the day builds to its horrific climax, Dorrigo Evans battles and fails in his quest to save the lives of his fellow POWs, a man is killed for no reason, and a love story unfolds.

Listened to the audio version of this via the Borrowbox app from the library.An astonishing story full of love, loss and the horrors of war from a variety of perspectives. It's also the tale before, during and after of the impacts of relationships and atrocities witnessed have on those involved. And yes there are some cliche moments dotted throughout, but overall this is historical fiction written exceedingly well and you're left haunted and deeply moved emotionally in equal measures.The story centres around Dorrigo Evans and his extraordinary life and through his memories we get to witness a love affair that was doomed from the start, his time at a prisoner of war camp in Japan where friendships were formed and the darkest times witnessed, and to life after the war and how being back in the real world felt so hollow and his thoughts would often go back to the past and what he had lived through and lost.The strongest part of the book for me was the time of War, and the way it was told from the perspective of the prisoners alongside that of the Japanese officers were equally powerful. The despair on both sides of what they were experiencing wasn't easy reading at times but made for such a compelling story.An extraordinary story and one I was glad to hear the author reading on the audio version.