#BookReview The Shape Of Us by Drew Davies 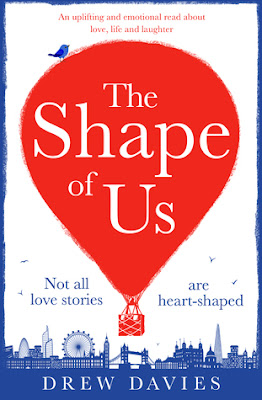 In a city of 8.8 million people, you’d be surprised. Surprised at how many times your path crosses with that stranger you spotted on the other side of the street. Surprised at how lonely living in a busy city can feel. Surprised that falling in love – against all the odds – is just about possible. One day in London… Daisy is rushing to work when a stranger on a bicycle almost knocks her over – and then asks for her number. JoJo, a wife in her sixties, is trying desperately to win her beloved husband back from his mistress. Adam has recently lost his job and lies to his housemate about where he goes every day. Dylan, a teenage boy, lives with an illness which means he can’t leave his bedroom – but which hasn’t stopped him falling in love. These four total strangers – whose paths cross in the charming and crazy city of London – have one thing in common. They’re all looking for love and they’re totally hopeless at it. But that’s about to change. A hilarious, uplifting and heartfelt novel about love, life and finding happiness. If you’ve ever made a mistake, suffered a break-up, waited by your phone for it to ring or loved someone from afar, then The Shape of Us is for you. A charming and joyous debut for fans of David Nicholls, Zoe Folbigg’s The Noteand Jules Preston’s The Map of Us.

This is a warm and witty story of 4 Londoners dealing with the complexities of life and love! I loved the way it was told with little snapshots of all the characters contending with all that life was throwing their way - and there's a lot to deal with!The range of characters also added to the enjoyment - they weren't all young bunnies in the prime of their lives bemoaning the lack of romance in their lives. There's JoJo who is in her 60's and dealing with life being the other woman in her husbands' life, and how she could have let it destroy her but choses a different path. And then there's Dylan who is 16 and dealing with life as a teenager who has M.E and how that affects so much of his life. Being an M.E sufferer myself I really connected with many of his feelings and how he embraced the simple pleasures in life and was so grateful to those who were kind to him while he was unable to participate in life, but how he kept the fight alive in himself to keep pushing on to do what he could.Then there's Adam who is leading an extraordinary secretive life, unable to seemingly tell the truth to those close to him but finding kindness where he least expects it, and also Chris and Daisy who are in the early stages of their romance and all those pressures and intricacies of how quickly to push things, what to write in text messages - the do's and don'ts of relationships!As their lives unfold we start to see the links between them and this was really cleverly done against the backdrop of London where life is evolving constantly. You really could imagine this as a film as there is so much to connect with as readers of all ages. It shows the different stages of life and love - the getting together, the breaking up and all that goes in between!A really intelligently written story and I look forward to more from this author in the future.