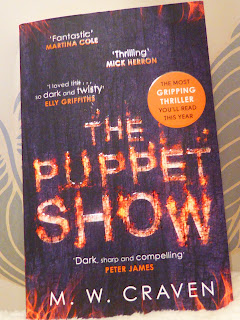 Delighted to be taking part in sharing the love for this thrilling book, ahead of its' release in paperback on the 24th January!  Get your orders in now if you've not already read it as I promise you it's truly compelling!!

My thanks to the author and publisher for letting me be part of it all and the advanced copy  in return for a fair and honest review.

A serial killer is burning people alive in the Lake District's prehistoric stone circles. He leaves no clues and the police are helpless. When his name is found carved into the charred remains of the third victim, disgraced detective Washington Poe is brought back from suspension and into an investigation he wants no part of . . .
Reluctantly partnered with the brilliant, but socially awkward, civilian analyst, Tilly Bradshaw, the mismatched pair uncover a trail that only he is meant to see. The elusive killer has a plan and for some reason Poe is part of it.
As the body count rises, Poe discovers he has far more invested in the case than he could have possibly imagined. And in a shocking finale that will shatter everything he's ever believed about himself, Poe will learn that there are things far worse than being burned alive ...

'A powerful thriller from an explosive new talent. Tightly plotted, and not for the faint hearted!'
David Mark


'A gripping start to a much anticipated new series' Vaseem Khan

'Satisfyingly twisty and clever and the flashes of humour work well to offer the reader respite from the thrill of the read.' Michael J. Malone

M. W. Craven was born in Carlisle but grew up in Newcastle, running away to join the army at the tender age of sixteen. He spent the next ten years travelling the world having fun, leaving in 1995 to complete a degree in social work with specialisms in criminology and substance misuse. Thirty-one years after leaving Cumbria, he returned to take up a probation officer position in Whitehaven, eventually working his way up to chief officer grade. Sixteen years later he took the plunge, accepted redundancy and became a full-time author. He now has entirely different motivations for trying to get inside the minds of criminals . . .M. W. Craven is married and lives in Carlisle with his wife, Joanne. When he isn’t out with his springer spaniel, or talking nonsense in the pub, he can usually be found at punk gigs and writing festivals up and down the country.

The beginning hooked me in straight away and I just couldn't put it down once I'd started! It is often brutal and chilling, but the author writes with such meticulous detail that you can't help but become that 'fly on the wall' watching the drama unfold around you, and wondering just what is around the corner, for both detectives and victims!We are introduced to Washington Poe who thought his crime solving days were behind him, but when a number of murder victims are found after being brutally tortured, he is called back to the force to help out with investigations, seeing as his name is found etched on one of the victims it brings things a little too close to home. What is the link between the victims and himself?The team around him are a great cast of characters - Tilly Bradshaw in particular. She is very socially awkward and has led a very sheltered life, but Poe takes to her immediately. He loves her honesty and becomes very protective of her when she faces situations out of her control. He can't stand by and watch people being bullied and it's fabulous to see the dynamics between these two 'misfits'!As the case evolves with more victims found left in historic stone circles, the team have a battle on their hands to stop whoever is behind it all before it's too late. I loved seeing the process of how they go about solving this case - it was often very unorthodox but it helped them join the dots and helped uncover some very dark stories from the past.There were so many twists and turns in this book, and it was, at times, a horrific read with the detail of the suffering each victim was put through, but it all just adds to the drama and mystery. I'm so glad to see this is the start of a series and I'll be counting down the days until the next book is published! Brilliant stuff!!