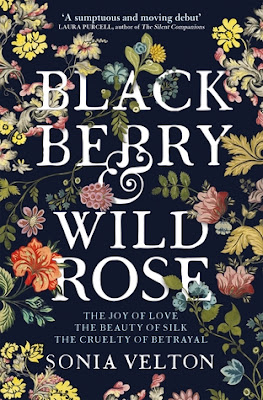 WHEN Esther Thorel, the wife of a Huguenot silk-weaver, rescues Sara Kemp from a brothel she thinks she is doing God’s will. Sara is not convinced being a maid is better than being a whore, but the chance to escape her grasping ‘madam’ is too good to refuse.Inside the Thorels’ tall house in Spitalfields, where the strange cadence of the looms fills the attic, the two women forge an uneasy relationship. The physical intimacies of washing and dressing belie the reality: Sara despises her mistress’s blindness to the hypocrisy of her household, while Esther is too wrapped up in her own secrets to see Sara as anything more than another charitable cause.It is silk that has Esther so distracted. For years she has painted her own designs, dreaming that one day her husband will weave them into reality. When he laughs at her ambition, she strikes up a relationship with one of the journeyman weavers in her attic who teaches her to weave and unwittingly sets in motion events that will change the fate of the whole Thorel household.

The trials and tribulations of 2 very different women in 18th century London are bought to life in this stunning historical fiction debut.Sara and Esther and brought together by circumstance. Esther is the wife of Elias, one of the finest silk weavers in Spitalfields, and their work in the community and church is well known and admired. Sara has a much different background, sent off to London by her mother and ends up being tricked into a world of prostitution, and when Esther rescues Sara after a chance meeting she hopes that giving her an alternative as a maid in their home is just the start that Sara deserves.Their relationship is often touching, often tense. You can sense the unease between them at times as they get used to one another - Sara doesn't really know how to respond to someone trying to help her and can often take umbridge at the demands put upon her. And for Esther, it is proving a distraction to have Sara around as she is dealing with her own marriage issues - the purpose of a wife in those days was to produce children, and that hasn't happened for Esther so she is left feeling quite useless and surplus to requirements in a very unhappy marriage.With the silk world beginning to change due to the import of Calico, there is more tension placed upon her husband and the workers he employs, and when Esther tries to get more hands on in the business it isn't taken well by her husband. Her escape is her artwork and when she has the idea of turning it into silk work she has to get help from one of the workers her husband finds himself in dispute with.There were so many elements to this book that i loved - the complex relationship between Sara and Esther being the main one. Esther had her own reasons for wanting to help this young girl and had no prejudices about the pasts of others, as her family had their own difficult time. And the setting of 18th century London and the troubles between the silk workers and their bosses were another fascinating side plot - how things could change so quickly because of outside influences and how desperate people were to protect themselves, their profits and their livelihoods.I raced through this book as I just became so involved with these women and their extraordinary lives and battles they faced. Highly recommended!!