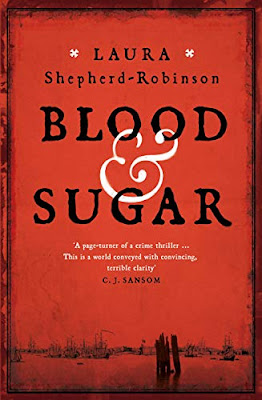 June, 1781. An unidentified body hangs upon a hook at Deptford Dock – horribly tortured and branded with a slaver’s mark.Some days later, Captain Harry Corsham – a war hero embarking upon a promising parliamentary career – is visited by the sister of an old friend. Her brother, passionate abolitionist Tad Archer, had been about to expose a secret that he believed could cause irreparable damage to the British slaving industry. He’d said people were trying to kill him, and now he is missing . . .To discover what happened to Tad, Harry is forced to pick up the threads of his friend's investigation, delving into the heart of the conspiracy Tad had unearthed. His investigation will threaten his political prospects, his family’s happiness, and force a reckoning with his past, risking the revelation of secrets that have the power to destroy him.And that is only if he can survive the mortal dangers awaiting him in Deptford...

A brutal but engaging historical debut  that I found enlightening and shocking and was completely gripped by!

Set in 18th century London, this story brings alive the story of the slave trade in Deptford when the discovery of the body of a leading abolitionist  is found branded with a slave mark, and the family turn to Captain Harry to help them discover just why Tad had met such an untimely and shocking end.

The more he delves into the goings on of the slave trade that was thriving at that time, the more he is plunged into a darker world where those making money close ranks and will do anything to protect themselves and their way of life.

I think the most striking thing about this story was how the author had really captured the callous ways of life back then - from the language used, the attitudes to those used in the slave trade and the general unpleasantness of life for many on the streets of London.  The lack of welfare or concern for many would shock us now, but back then it was par for the course.  And those questioned by Tad were often too scared to say anything in fear of upsetting those in charge who didn't care who got in their way and would be dealt with in vicious ways.

It isn't an easy read at times with the levels of cruelty and lack of humanity shown, but the author does an amazing job of keeping the reader hooked with new revelations and twists.

My thanks to the author, publisher and Tracy Fenton for the advanced reader copy in return for a fair and honest review.