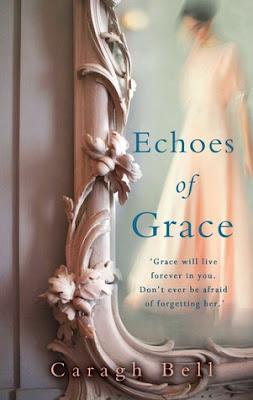 Even in death, love survivesGrace Molloy was the darling of the theatre scene. Young and dazzling, she gave it all up to marry the playwright Henry Sinclair, thirty years her senior. Then, one stormy night, she died giving birth to her daughter, Aurora.Left with no memory of her mother, Aurora is raised by Henry and her nanny, Maggie, in a huge old house on the Cornish coastline. All the little girl has of Grace is a portrait – a painting of a woman in a white dress, her beautiful face frozen in time.Aurora grows up, resembling Grace in looks and talent. She pursues her dream of being on the stage and soon achieves great success in the world of theatre, like her mother before her. Then a secret unfolds – a secret that could threaten all that she holds dear . . .Echoes of Grace is the story of a young woman who, having overcome a painful past, must now embrace it to find her real self.

I found this to be a delightfully absorbing story of a young woman striving to find herself in a world where those around her try to shield her from the truth.

The story of Aurora starts in Cornwall as a young girl. Her mother died in childbirth so she's been brought up by her grieving father, and she's learnt to cope by creating a fantasy world through playing with her dolls.  The housekeeper Maggie has become a surrogate mother to her, but she still seems eager to find out more about the glamorous mother she didn't get to know, especially as she is always told how much she looks like Grace,   She was an actress, her father a playwright so it seems a creative life lies ahead for young Aurora.

When her father finds love again, she is quickly taken in by the loving new family which is so different to what she experienced with her older half brothers.  She builds up a very strong bond with all her new brothers and sister, especially James.

The story then fast forwards to years later when she's working in London and her own acting career is really taking off.  She still has an extremely close bond with her family and it's fascinating to see how their own lives have progressed as they all lead such different lives.  Tragedy soon strikes though and it really rocks Aurora and all she has known, and she is really torn especially with her career just about to hit the big time.

I really enjoyed how this story looks at the complicated relationships that can be thrown up with families - some can be extremely supportive, others thrive on jealousy and looking to belittle one another.  Aurora is one of those characters too that you can easily connect with considering the start she had in life, and how she deals with things and doesn't ever seem to get bitter with what life has thrown her way.  The story flowed really nicely and there was always some drama or a twist to keep your interest throughout.

My thanks to Poolbeg for the advanced readers copy in return for a fair and honest review.