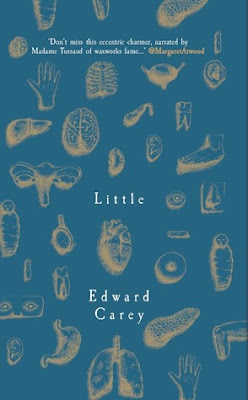 'Don’t miss this eccentric charmer!’ — @MargaretAtwood'Edward Carey’s Little is one of the most original historical novels of the year.' — The Sunday Times
“There is a space between life and death: it’s called waxworks”The wry, macabre, unforgettable tale of an ambitious orphan in Revolutionary Paris, befriended by royalty and radicals alike, who transforms herself into the legendary Madame Tussaud.In 1761, a tiny, odd-looking girl named Marie is born in a village in Alsace. After the death of her parents, she is apprenticed to an eccentric wax sculptor and whisked off to the seamy streets of Paris, where they meet a domineering widow and her quiet, pale son. Together, they convert an abandoned monkey house into an exhibition hall for wax heads, and the spectacle becomes a sensation. As word of her artistic talent spreads, Marie is called to Versailles, where she tutors a princess and saves Marie Antoinette in childbirth. But outside the palace walls, Paris is roiling: The revolutionary mob is demanding heads, and . . . at the wax museum, heads are what they do.Edward Carey’s Little is a wonder – the incredible story of a ‘blood-stained crumb of a girl’ who went on to shape the world

What a way to start off my reading year in 2019! This was an astonishing piece of historical fiction and I cannot recommend this highly enough as I'm sure you'll fall in love with 'Little' Marie as she comes from very humble beginnings to being part of the world of wax that still lives on now!When Marie loses both parents before she turns 6, she finds herself taken under the wing of Doctor Curtius, a peculiar and quirky man who creates body parts from wax, and their bond is particularly touching.When they move to Paris their relationship changes, the Doctor has his head turned by the 'widow' and Marie soon finds herself in a particularly sad and lonely space. The treatment she suffers is heartbreaking but she refuses to crack under the pressure and just hows how spirited she is and how determined she is to make something of her life.The connection between various characters is what makes this book I think, along with the wonderful settings and situations that Marie finds herself in. From being beaten, to living amongst the splendour of the palace of Versailles - I just couldn't put this book down at times as it was just so beautifully written and staged.The addition of beautiful illustrations scattered throughout the book really added to the reading experience and I'm just itching to pick this back up and enjoy it all over again! It was a wonderful story that really connected the historic moments in the life of Marie with humour, sadness, creativity and tenderness.Already guaranteed to be on my best books of 2019 list and we're only a few days into January! Need I say anymore!!