#BookReview Something To Tell You by Lucy Diamond 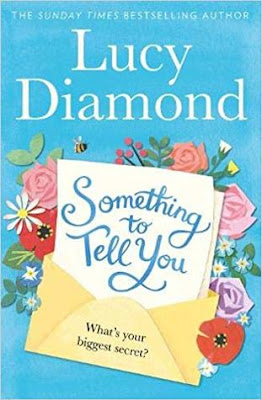 When Frankie stumbles upon an unopened letter from her late mother, she’s delighted to have one last message from her . . . until she reads the contents and discovers the truth about her birth. Brimming with questions, she travels to York to seek further answers from the Mortimer family, but her appearance sends shockwaves through them all.

Meanwhile, Robyn Mortimer has problems of her own. Her husband John has become distant, and a chance remark from a friend leads Robyn to wonder exactly what he’s not been saying. Dare she find out more?

As for Bunny, she fell head over heels in love with Dave Mortimer when she first arrived in town, but now it seems her past is catching up with her. She can’t help wondering if he’ll still feel the same way about her if he discovers who she really is – and what she did.

As secrets tumble out and loyalties are tested, the Mortimers have to face up to some difficult decisions. With love, betrayal and dramatic revelations in the mix, this is one summer they’ll never forget.

I've always been a huge fan of Lucy Diamond, so always race to read her latest releases when they're out, and in Something To Tell You it's a story that felt very 'grown up' that focused on more serious issues and how the emotional impact of those impact people. There are a lot of characters that do take a while to connect with and keep up with who was who! But once you're 'in' then I found myself really enjoying the story and seeing how all the different female characters dealt with the problems that they found themselves facing.The Mortimer family are an extremely tight family unit, and are all together for the 50th wedding anniversary of Jeanie and Harry - life is going well for them all! But then a stranger appears out of nowhere and their cosy lives begin to crumble when the truth about the past is revealed.Frankie is dealing with the loss of her mother last year, and when she finds a letter from her mother she is shocked with the revelations she reads. She just wants answers and the only person who can help her with that is Harry.It was fascinating to see how the Mortimer children dealt with the news that their 'hero' father is fallible, and to Jeanie his wife too - the man she doted on wasn't as perfect as she first thought. The way she deals with the news is understandable and adds some light relief to the story as she escapes the situation to let him face up to what he has done.The brothers and sisters are all having problems in their own lives too and I enjoyed how it shows people re-assessing their lives at different stages - just when you think you've got life figured out there's always a curve ball to throw you off course!I think this story deals well with the drama and difficulty of family relationships after unexpected news and how it can affect your day to day life. It features the perils of online dating, abusive relationships, affairs and how a settled life can soon be upturned in an instant - all issues that can be so relevant in the society we now live in. I would have liked a bit more humour to balance out some of the heavier storylines, but overall I thought it was a book with plenty to keep you entertained and an intriguing mix of characters!