#BookReview The Sudden Departure of the Frasers by Louise Candlish #LibraryLoveChallenge 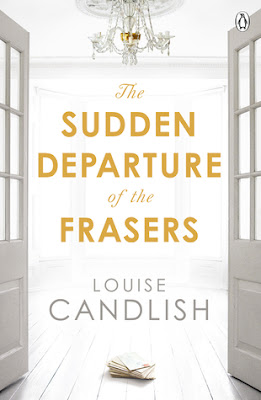 Welcome to Lime Park Road. A picture-perfect street with a secret at its heart.When Joe and Christy Davenport step behind the Oxford Blue painted door of their 'for ever' home, they believe their dreams have come true.Yet the boxes aren't even unpacked before a series of events leads Christy to become obsessed with the previous occupant, the glamorous, enigmatic Amber Fraser, whose departure from Lime Park Road is shrouded in mystery.What happened to her? And why are Joe and Christy's attempts at friendship with neighbours met with an unnerving silence?As Christy unravels the shocking truth about the Frasers and the place she now calls home, she discovers that behind the closed doors of even the most desirable postcodes, terrible secrets lurk.

I found this to be really engaging but quite a dark read, and the intrigue that followed with the departure of the Frasers from the neighbourhood, which leads to the Davenports being able to move into the home of their dreams was cleverly managed and well written.When Christy and Joe move to Lime Park Road they think all their wishes have come true but it's really the start of a nightmare for them as they notice the neighbours act very strangely towards them, and are reluctant to discuss just what happened to the family who lived there before and who had moved out so quickly.The story flits between the present, with Christy becoming obsessed with trying to find out what really went on in their new home and trying to befriend her new neighbours, and also goes back to the past so that we see the story from the point of view of Amber Fraser, the glamourous wife of Jeremy, and how she viewed her time at Lime Park Road - and she has some stories to tell!!This is a book to have you wondering about what goes on behind closed doors in your neighbourhood and just how dark and devious those you least expect can be! Those whose lifestyles you envy might not be all that they are cracked up to be!Definitely hope to read more from this author in the future