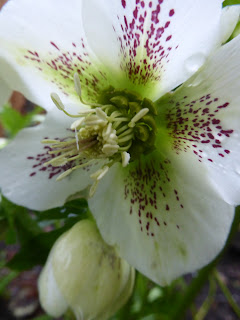 Hello bookish friends!!  Hope all is well in your world!  Feeling very sluggish here this past week and even the appearance of snow - well a few flakes fell but not enough to build a snowball let alone a snowman! - perked me up! Maybe the January blues are to blame - hurry up February if that is the case!

On to the books!  A slower pace of reading this week but still managed to get 3 books finished! And the 'no buy' January is still going extremely well with no new purchases of any kind all month!  Do I dare continue this into February?! Decisions Decisions!!

There have been new additions thanks to review copies and a visit or two to NetGalley! Ooh and a library haul for me this week too - hoping to try a few different kind of books out this way!

So here's a look back at my week! Click on the titles for a link back to the GoodReads pages!

Something To Tell You by Lucy Diamond  - 3 stars

Another enjoyable story from one of my favourite authors - a bit more serious than some of her previous books though!

Another absorbing story from Angela - full review to come on Tuesday!

Just the four (oops!)  new additions this week! I really should stop visiting the site for a while!

It’s takes one minute to change everything…
Vivienne Shager has it all. A highflying job. A beautiful apartment. Friends whose lives are as perfect as her own. But on the afternoon of her 27th birthday, Vivi has a heart attack.
Now Vivi’s life shrinks back to how it begun, as she moves back to the small seaside town she grew up in. With her time running out, there is one thing she wants to know the truth about.
Some secrets are best left in the past…
Thirty years earlier, Shelley’s family home, Deerwood farm, bursts full of love and happiness. But one family member has hidden a secret for all these years. Until Vivi comes home demanding answers, and it takes just a moment to unravel the lie at their heart of their lives…
The Girl He Used To Know by Tracey Garvis Graves
Publication Date - 4th April 2019

What if you had a second chance at first love?
Annika Rose likes being alone.
She feels lost in social situations, saying the wrong thing or acting the wrong way. She just can't read people. She prefers the quiet solitude of books or playing chess to being around others. Apart from Jonathan. She liked being around him, but she hasn't seen him for ten years. Until now that is. And she's not sure he'll want to see her again after what happened all those years ago.


Annika Rose likes being alone.
Except that, actually, she doesn't like being alone at all.


The Girl He Used to Know is an uplifting novel full of surprising revelations that keep you turning the page. Perfect for fans of Jojo Moyes, Gail Honeyman, Jill Santopolo and Sliding Doors.

Mary, Elizabeth and Henrietta Anne, the daughters of King Charles I and his queen, Henrietta Maria, would be brought up against the background of the English Civil War. Mary would marry William, Prince of Orange, and be sent to live in the Netherlands. Elizabeth would remain in England under Parliamentary control. Henrietta Anne would escape to France and be the darling of the French Court. Yet none of the Stuart princesses would live to reach thirty. The Tragic Daughters of Charles I is their story.

It is 1980. Lizzie Vogel is eighteen and about to learn some vital lessons about adult life:

1. How to deal with your boss
(when he is a racist, sexist, slightly incompetent dentist who is obsessed with joining the freemasons)

2. How to live alone
(when your first flat comes with the job but the boss insists on using your toilet)

3. How to seduce your first boyfriend
(when he might prefer birdwatching and you must wear socks and sandals due to a case of recurring athlete's foot)

Will Lizzie become an independent woman or will she be forced to return home to her alcoholic,
novel-writing mother (which might actually be the better option after all)?

I would like to introduce myself, I feel it's only fair. Only I know you so well now, you might get a scare. I know you know I'm in there, though I crept with greatest stealth: I am the hidden monster buried within yourself. Joyce is only sixteen when she's torn from the life she loves. Two years pass, but Joyce, her family, and her best friend Logan, are no closer to learning what's causing her dizzying array of symptoms. As Joyce tried to come to terms with her increasing limitations those around her struggle to understand what she is going through. Baffled and unsure, the doctors eventually diagnose Joyce with ME and CFS. But when Joyce and her family refuse to accept this diagnosis, her mental stability is called into question. Desperate for the truth and scared for Joyce's life, their only hope lies in a private hospital where she is finally diagnosed with Lyme Disease. Can Joyce survive a treatment as brutal as her illness? Can she find her way in a world she no longer recognises?


Stalker by Lars Kepler - ahead of blog tour in February

The internationally bestselling authors of The Sandman and The Hypnotist return with a terrifying new thriller: Detective Joona Linna--recently returned from compassionate leave--reunites with hypnotist Erik Maria Bark in a search for a seemingly unassailable sadistic killer.The Swedish National Crime Unit receives a video of a young woman in her home, clearly unaware that she's being watched. Soon after the tape is received, the woman's body is found horrifically mutilated. With the arrival of the next, similar video, the police understand that the killer is toying with them, warning of a new victim, knowing there's nothing they can do. Detective Margot Silverman is put in charge of the investigation, and soon asks Detective Joona Linna for help. Linna, in turn, recruits Erik Maria Bark, the hypnotist and expert in trauma, with whom Linna's worked before. Bark is leery of forcing people to give up their secrets. But this time, Bark is the one hiding things. Years before, he had put a man away for an eerily similar crime, and now he's beginning to think that an innocent man may be behind bars--and a serial killer still on the loose. . .

The Sudden Departure of the Frasers by Louise Candlish

Welcome to Lime Park Road. A picture-perfect street with a secret at its heart.When Joe and Christy Davenport step behind the Oxford Blue painted door of their 'for ever' home, they believe their dreams have come true.Yet the boxes aren't even unpacked before a series of events leads Christy to become obsessed with the previous occupant, the glamorous, enigmatic Amber Fraser, whose departure from Lime Park Road is shrouded in mystery.What happened to her? And why are Joe and Christy's attempts at friendship with neighbours met with an unnerving silence?As Christy unravels the shocking truth about the Frasers and the place she now calls home, she discovers that behind the closed doors of even the most desirable postcodes, terrible secrets lurk.

When Fionn Boyle sets foot on Arranmore Island, it begins to stir beneath his feet ...Once in a generation, Arranmore Island chooses a new Storm Keeper to wield its power and keep its magic safe from enemies. The time has come for Fionn's grandfather, a secretive and eccentric old man, to step down. Soon, a new Keeper will rise.But, deep underground, someone has been waiting for Fionn. As the battle to become the island's next champion rages, a more sinister magic is waking up, intent on rekindling an ancient war.