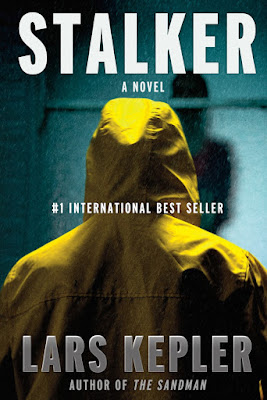 Huge pleasure to be involved in the Blog Tour for this terrifying new release - my thanks to the author and publisher for letting me be part of it all and I'll be sharing my review today!

Here's a little more about the book to set the scene!

The internationally bestselling authors of The Sandman and The Hypnotist return with a terrifying new thriller: Detective Joona Linna--recently returned from compassionate leave--reunites with hypnotist Erik Maria Bark in a search for a seemingly unassailable sadistic killer.
The Swedish National Crime Unit receives a video of a young woman in her home, clearly unaware that she's being watched. Soon after the tape is received, the woman's body is found horrifically mutilated. With the arrival of the next, similar video, the police understand that the killer is toying with them, warning of a new victim, knowing there's nothing they can do. Detective Margot Silverman is put in charge of the investigation, and soon asks Detective Joona Linna for help. Linna, in turn, recruits Erik Maria Bark, the hypnotist and expert in trauma, with whom Linna's worked before. Bark is leery of forcing people to give up their secrets. But this time, Bark is the one hiding things.
Years before, he had put a man away for an eerily similar crime, and now he's beginning to think that an innocent man may be behind bars--and a serial killer still on the loose. . .

Early Praise for STALKER:
“The reveal of the stalker’s identity is a genuine gut-punch. . . . Kepler (the pen name for the husband-and-wife writing team of Alexander and Alexandra Ahndoril) does a masterly job of elevating the serial killer thriller beyond genre clichés and tropes.” — Publishers Weekly (starred review)

“An intricate plot and escalating tension set the stage for this tense, clever, pulse-pounding thriller. A must for fans of Stieg Larsson.” —J.D. Barker, international best-selling author of The Fourth Monkey

“Dark, complex, and chillingly intelligent, Stalker hooks you on page one and never relents. Lars
Kepler’s vivid, visceral thriller had me holding my breath to the last page.” —Meg Gardiner,
Edgar-winning author of UNSUB and Into the Black Nowhere

LARS KEPLER is the pseudonym of the critically acclaimed husband and wife team Alexandra Coelho Ahndoril and Alexander Ahndoril. Their number one internationally bestselling Joona Linna series has sold more than twelve million copies in forty languages. The Ahndorils were both established writers before they adopted the pen name Lars Kepler and have each published several acclaimed novels. They live in Stockholm, Sweden. Translated by Neil Smith.

What have I learnt from reading this book?!  KEEP YOUR CURTAINS CLOSED AT ALL TIMES!!!! A terrifying but brilliant story that can't help leave you feeling really unsettled and on edge as you turn each page!

I hadn't read any of the previous books in this series - but I will soon rectify that! - and that didn't spoil my enjoyment of this story which is a fabulous study of obsessive personalities, the fear of being watched and that race against time to try and save the next victim as the 'stalker' liked to film the victims in their homes and upload the clips online before he struck.  The desperation of the detectives trying to locate each victim is clear for all to see, but knowing they're going to be too late to save people is crucifying them.

Trying to work out just who The Stalker is was a complex and very cleverly drawn out affair.  There are glimpses back to old cases which link to these current murders,and as you begin to enter a very dark world that surrounds the plot and really adds to the sinister side of this story.  Hypnosis is used but that often doesn't get a clearer picture for everyone and I found it to be a head scratcher at times trying to work out just who they could trust and just what link, if any, there was between the poor victims.

With such a pulsating start and ending, it was only fair that things did slow down a little during the middle, but the action and twists made up for that when things all became a little clearer towards the end and I am looking forward to going back to the previous books in the series to get more of a fix of these flawed but fascinating characters!

Highly recommended if you like your crime dark and twisted ... just keep away from the windows! 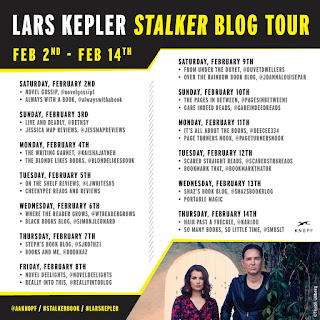